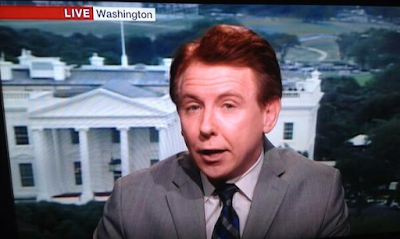 Another snapshot (from this morning's Today):

JUSTIN WEBB: Donald Trump is on the campaign trail. That's what they're calling his event in Florida, "a campaign event" - which has some scratching their heads as the campaign. [John Humphrys laughs]. Isn't the campaign over? Our Washington correspondent is David Willis.
DAVID WILLIS: He's on a roll following Wednesday's rather adversarial press conference, despite the fact that it struck many people as pretty chaotic. He believes he got his message across, he regained control of the narrative, if you like, after weeks of bad headlines. And today's rally, which is in an aircraft hangar in Orlando, is a way of staying on the offensive in just the sort of environment that Donald Trump most relishes - a large gathering in front of a very supportive crowd.
JUSTIN WEBB: And he's been tweeting again?
DAVID WILLIS: He has, and overnight he took to Twitter to declare that the media, in his words, "was not his enemy but the the enemy of the American people". Now that is, of course, a fairly serious allegation. There are those who are wondering, I think Justin, where all this is going, what it could mean for the First Amendment and so on.
JUSTIN WEBB: Yeah, the First Amendment guaranteeing freedom of speech and freedom of the media. And the feeling among some that what he will do is, what, literally put lives at risk?
DAVID WILLIS: Potentially, yes. I mean there are those who are saying that, you know, if there is an attack on a member of the media because of all this, how would Donald Trump respond? And it's a good question. He does tend to get people heated up at his rallies. He feeds off the crowd's energy, of course, and that allows him to deliver a direct message, unfiltered message, to the people who voted for him - his movement, as he puts it. To those people this sort of message could be quite incendiary.
JUSTIN WEBB: Hmm. And for those people who support him but who aren't considering any kind of violence, all of this feels like, doesn't it, someone who is pretty much doing what you would have expected him to do when you elected him?
DAVID WILLIS: Well, the strange thing about this is the rallying aspect, because in the past presidents have been very keen to go off on the campaign trail and escape the hothouse atmosphere of Washington but they would tend to leave it, of course, until there was rather less time to go until the next election - not, as in this case, nearly four years.
JUSTIN WEBB: David Willis in Washington, thanks.