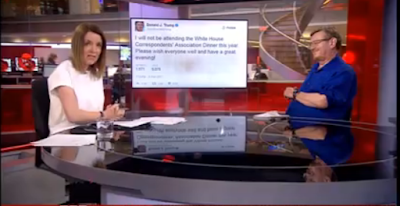 Mark Mardell was on the BBC News Channel this afternoon, repeating - at times almost word-for-word - his take on the White House Correspondents dinner affair, as conveyed to Jane Garvey on this morning's Broadcasting House.

A transcript of the whole of it would prove overly repetitive, so here are bits where he said something different:

ANNITA McVEIGH: Talking about the motive, is this the Trump administration basically trying to reinforce its fake news agenda, saying to people, look, the President doesn't think it's worth his time to be going along and attending this dinner?
MARK MARDELL: I think so. I mean, you could say he's being slightly petulant - I mean, that's, certainly from what we've seen of his personality, relatively likely...that he genuinely doesn't like these people, he genuinely wants nothing to do with them.

ANNITA McVEIGH: What is the media response going to be to this, because this is a new low in relations, isn't it, between the US president and the media? So what's the response going to be?
MARK MARDELL: I think there's an air of anxiety generally about how this develops. We saw that with the briefing that excluded some people, including the BBC. Do the others not take part and say 'no, we've got to make a stand here', or is that cutting off their nose to spite their face, and not serving their audience properly? So this will be just seen as another development in what a lot of people are really worried about, that there seemed to be... Remember, the term "fake news" was coined to describe completely false, utterly false, stories peddled by some people with an agenda. There was no truth in them whatsoever. Now Donald Trump is using it to describe stories he simply doesn't like. He's not even disputing certain facts, but just saying 'I don't like it, so it's fake news'. So he's established a moral equivalence between sheer lies and the press that he doesn't like.