The BBC's pro-immigration Home Affairs Editor Mark Easton was in typical form on last night's BBC One News at Six and News at Ten - the following report appearing on both bulletins.

His contribution concentrated purely on the possible negative consequences of lower immigration, with a one-sided selection of voices and several rhetorical devices.

It clearly had a purpose: 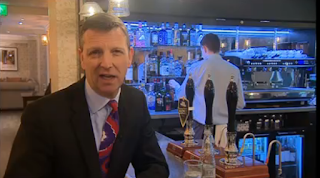 NEWSREADER: The first official figures following last year's EU referendum show a fall in net migration to the UK - the difference between the number of people coming to live here and those leaving. It stands at 273,000, down 49,000 on the previous year, though still far above the Government target of below 100,000. The fall is partly due to Eastern Europeans returning home to countries like Poland and Hungary. There's also been a significant fall in overseas student numbers. Our Home Editor, Mark Easton, reports.

MARK EASTON: Worried about immigration? They are at York's Monkbar Hotel. Not that there's too much but that there soon may not be enough. York's tourist industry is booming, now worth a remarkable half a billion pounds a year and supporting a record 20,000 jobs across the city. But growth here, as in much of the hospitality industry, has relied on migrant labour. Romanians change the hotel beds. The waiter is Spanish. Half the staff are EU migrants. In fact, with very low unemployment in York, businesses like this cannot grow or even survive without a supply of foreign workers. A quarter of British hospitality businesses say they have currently got vacancies that they are struggling to fill. With the UK labour market close to capacity and the prospect of a squeeze on EU migrant labour, there are real concerns for the future.

GRAHAM USHER (York Hoteliers' Association): It would create a staffing crisis, to get to a point where we can't fill that resource with a European worker, then there's a big gap that we just can't fill.
MARK EASTON: What about British workers?
GRAHAM USHER: For York as an example, there isn't enough of them around.

MARK EASTON: The latest figures show a big drop in the numbers coming to work in Britain from countries like Poland, down 16%, Hungary, down 14%, Lithuania, down 6%. More are coming from Romania, up 11%, and Bulgarian, up 8%. But many experts predict those arrivals will start to fall soon too.

MARK EASTON: Coming to work and to study. Contributing to the fall in net migration, the number of international students has dropped significantly since the Brexit vote, with warnings from universities that institutions will lose vital income. In the last few days, government ministers have struck a less hardline tone on immigration.

AMBER RUDD: The UK will always be a welcoming place for people who want to come here, work here and contribute to our economy. It's just that there's no support for uncontrolled immigration.

MARK EASTON: Reducing net migration by almost two thirds remains a clear commitment from the Prime Minister. Supporters of the policy say Britain needs to overcome its addiction to cheap migrant labour and train and recruit more home-grown workers. But the owner of this Yorkshire carrot farm says he has to employ eastern Europeans because there are simply not enough local workers.

GUY POSKITT, Poskitt's Carrots: My message is very simple to Mrs May. Take my workers away from me, but you'll take yours out of your health service and your care homes and see how you can run your businesses, because I can't run mine.