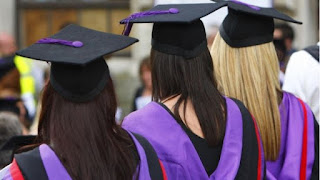 The BBC can confirm their earlier speculative proclamation that most Remain voters are young and university-educated, while Leave voters are elderly and ignorant and really shouldn’t have been given a vote.

Are the elderly too stupid and selfish to care about their children’s and grandchildren’s future, or is ‘consideration for the next generation’ precisely why the old grannies people voted Brexit?  Hmm. Are the younger generation thinking long-term, or were they a little terrified by the Remain campaign’s dire predictions of short-term economic catastrophe? Who knows.

Given that schools and universities have been ideologically left-wing for long enough to inculcate most of our educated classes with left-wing politics and pro EU propaganda, these findings don't seem very surprising.  i(I’s rumoured that some of this attitudinal inclination has seeped through to BBC.)

Who’da thunk it? Doesn’t really matter though, now, does it? Brexit means Brexit (maybe)
Posted by sue at 12:04