Getting the last word (thanks to the BBC) 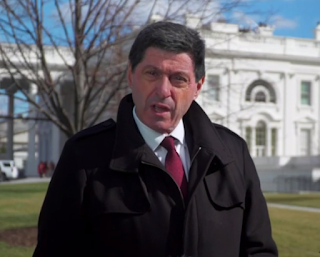 "Tonight at Ten, a furious Donald Trump rounds on the media for undermining his presidency", began Huw.

We then had Jon Sopel (twice) giving his take on the event in which he'd played so memorable a part - and, naturally, he came better out of his own telling of the story than Mr Trump.

Here's his post-report chat with Huw:

Huw Edwards: As Jon was saying the President fielded questions for 90 minutes and didn't hold back when challenged by representatives of the world's media, including our very own Jon Sopel - who joins us from Washington. Jon, was this a man really, obviously, trying to say he was under control or a man under great pressure?

Jon Sopel: I think it was a man under great pressure but also a man who was enjoying himself hugely. This was the Donald Trump of the campaign. He was bullying and bantering in equal measure. And there are a few things you take out from it. I mean, the man who loved WikiLeaks during the campaign not loving leaks so much now that he is governing. A man who hates the media so much... What really struck me was how much time he spends watching television and reading the newspapers. When does he find time to govern in the midst of all of that? And, for all that he accused the media of being dishonest, there were a few untruths that he spoke himself. Saying that Ronald Reagan, no one had got more electoral college votes since Ronald Reagan. That's just simply factually inaccurate. One other thing, Huw, apparently during the news conference a Republican Senator contacted a distinguished news anchor like yourself with this text: He should do this with a therapist, not on live television.

Huw Edwards: Jon, thank you very much once again. Jon Sopel there for us, with his experience today at that news conference at the White House.

And then, straight after (and with truly uncanny timing), came not one but two other news items about fake news.

It's as if the BBC planned it that way and were pushing an agenda. (Perish the thought!)
Posted by Craig at 21:24