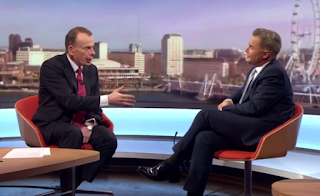 It's been a while since I've counted interruptions and done timings, but today's The Andrew Marr Show tempted me to give it a go again.
So, on the interruptions front, Mr Whittle got the worst of it this morning.
Posted by Craig at 11:08