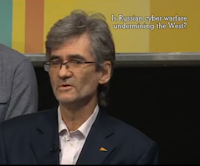 Mr. Putin won't be happy with the BBC this morning.

First, on The Andrew Marr Show, came the Russian leader's best-known political opponent, the admirable Garry Kasparov, and then the first question on The Big Questions was "Is Russian cyber warfare undermining the West?"

On the latter the  (Kremlin stooge) Russian broadcaster Sputnik came under the most intense fire, with Nicky Campbell putting this question to its head:


Nikolai Gorshkov, I want to bring him in, editor of Sputnik news. We hear about this, various elections coming up. We hear about trying to undermine the opponents of Marine Le Pen and undermining the opponent of Geert Wilders - anything that will ultimately put a politician in place who will be anti-NATO and anti-EU. If I may say so provocatively, your puppet masters, they bump people off. We're on the same moral road as North Korea...you know, people disappearing, assassinations.

Nikolai Gorshkov replied that they are journalists, a news agency that gives people "an opportunity to see other angles, more context, background".

He got quite a roasting though, especially during a memorable, forensic intervention from Ben Nimmo of the Atlantic Council, which I'll transcribe below...


Look out here for Nicky Campbell's feeble, jokey play of devil's advocacy and, above all, for the way the BBC presenter tried to pile on the pressure for Mr. Gorshkov with a little 'alternative fact' of his own...namely that Sputnik is also guilty of being homophobic.

Spiked's Tara McCormack immediately corrected Nicky by (accurately) pointing out that it wasn't Sputnik who had called called backers of Emmanuel Macron "a very rich gay lobby" but a French politician speaking on Sputnik (Nicolas Dhuicq of the Republicans).

What is it with BBC reporters and presenters at the moment? Why do they keep making such mistakes during their attempts to damage someone's (or some organisation's) reputation?

It's especially ironic (and inept) that Nicky Campbell made that false statement about Sputnik during a section which was highlighting the point that Sputnik is a purveyor of false, propagandist news.

BEN NIMMO: Can I jump in on the question of the journalism? This is important. You ask, "What is the founding document?" It's the presidential decree signed by President Putin on the 9th of December 2013 establishing the Rossiya Segodnya news agency, which is your parent company, which says in Paragraph Four that the purpose of this news agency is "to communicate the state policy the Russian Federation abroad. OK? Compare that with the BBC charter which says the purpose of the BBC is to be independent and impartial. Then if you look at your reporting. Good example would be the 2nd of February last year - I do this all the time, so I'm afraid I'm a geek on it! - Donald Tusk presents his proposals for how to keep Britain in the EU. The Vote Leave campaign issued a press release on it. The Vote Remain campaign issued a press release on it. Reuters in their reporting quoted both the Leave and the Remain press releases. Sputnik quoted the Leave press release and not the Remain press release. If you look at the coverage over the last two weeks, last week the BBC did a feature on Sputnik and the allegations that it's a propaganda outlet which quoted you saying that 'we're not'. Yeah? That's balanced journalism...

NICKY CAMPBELL: Is the BBC blameless?

BEN NIMMO: The BBC quoted the allegations against Sputnik and the response from Sputnik. The week before, Sputnik France ran a feature on allegations of propaganda and bias by the French media in favour of Emmanuel Macron. Only one person was quoted in that story, who was a political opponent of Macron who was accusing French journalists of going to a Moscow rally for Macron and putting on his T-shirts. No French journalist was interviewed in that...

NICKY CAMBPELL: And  also, if I may say, it said on Sputnik that Macron was backed by "a very rich gay lobby", so homophobic as well?

Mr. Gorshkov, incidentally, has an interesting back history. He worked for the BBC from 1993 to 2013, beginning as a producer and desk editor for the BBC World Service before becoming a BBC correspondent and then, via BBC Monitoring, rising to be a BBC regional manager and, finally, the head of the BBC Hub in Ukraine and Moldova. He started as director of Sputnik in December 2014.
Posted by Craig at 12:27