"Do we misrepresent Islam?" 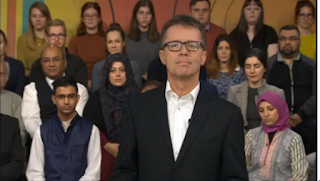 Nicky Campbell popped up towards the end of the Marr show, as always, to tease us with the upcoming delights of The Big Questions.

Join us from Birmingham at Ten when we'll be debating Islam - do we misrepresent it? - then reincarnation - have some of you been here before? - and marriage - one of the last bastions of patriarchy or is marriage what you make it? See you at Ten on BBC One.

The activities of Islamist extremism across the globe have killed many more Muslims than people from other faiths, as we saw yet again earlier this month when 80 worshippers were killed and 250 injured by an Islamist suicide bomber at the Sufi Muslim shrine, Sehwan Sharif, in Pakistan. Last week Pope Francis declared that Muslim terrorism does not exist. Just as no-one puts the blame on Christianity when Christians engage in violent or criminal activities, so neither should Islam be blamed for the crimes of Islamists. Do we misrepresent Islam?

I didn't get very far with it. When Imam Masroor stated being unpleasant to ex-Muslim Sadia (almost from his first word), I switched off.
Posted by Craig at 14:17