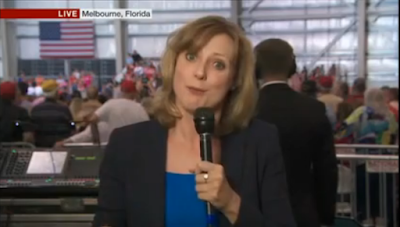 I suppose we all fall into habits and repeat ourselves. (I certainly do - as regular readers of this blog will be well aware). But the BBC's Laura Bicker has taken the art of 'repeating oneself' to a new high in recent days.

I must have heard about seven or eight different reports from her and her coverage of the Trump rally in particular has, on the whole, been far less sarky than what you'd expect from the rest of her BBC colleagues, but Laura has found a particular formulation to fit into her many pieces over the last few days, and she's stuck with it (with slight variations), like Philip Glass with a chord progression. So much so that I've started laughing every time I hear it.

And it was there again on tonight's BBC One evening news bulletin - and, to my great amusement, it came in two versions:


Perhaps you will start noticing it too from now on. A fixation shared is a fixation halved.
Posted by Craig at 21:07