John Gray on 'The Spectre of Populism'

When a respected European academic told me only a few years ago that at least another century would have to pass before the European Union became the transnational state it was meant to be I couldn't help smiling.

Like many supporters of the European project he looked forward to a time when nation states would be replaced by a Europe-wide federal government. He recognised that this might take some time. Conceding that it could require a hundred years or more, he seemed to think, showed an admirable sense of reality.

To me, the idea that the rest of the world would stop and wait while the EU moved slowly towards full political union was comically unreal. What would China and India be doing during this majestic process. More to the point, how would Europe's voters feel as they watched this project unfold, decade after decade, generation after generation, for another hundred years? The notion that they'd stand by humbly as their rulers pursued a vision most of them never shared it seemed to me delusional.

Today I think it's an attitude of the kind the academic displayed - a mix of high-minded idealism, intellectual arrogance and childish naivety - that has fuelled the advance of the movements that are being lazily lumped together as "populism".

Few terms are more often tossed around in politics these days than this buzz word, lifted from what was once mistakenly called "political science", and none is more misleading.

It's being used to conjure up images of the dark forces that stalked Europe in the 1930s but, in itself, the word means almost nothing.

A populist party is one that claims to stand apart from the Establishment and speak for those who are excluded from conventional politics. I this sense, many quite different parties can be seen as populist. Some on the far-right do hark back to the Thirties. The Austrian Freedom Party, whose leader only just missed becoming president of the country a few months ago, was founded by former SS officer, whilst some members of the anti-immigrant Alternative for Germany party have said they see no need to apologise for the country's past. But in Greece and Spain it's Syriza and Podemos, parties of the Democratic Left,  that have challenged the prevailing consensus.

The new forces that are at work in politics come from all parts of the political spectrum yet they do have something in common: All of them reject the type of marketing liberalism that's been in power in much of the world in recent decades. Though the alternatives they propose differ widely, these new parties have broken with the belief that society must simply adapt to global market forces. None of them wants the kind of world that was for many years promoted at meetings of business leaders in high-priced Swiss mountain resorts. As a dominant force in politics Davos Man is dead.

It's remarkable how slow the political classes and pundits have been in cottoning on to this fact.

In America pretty well the whole of the mainstream media were confident that Donald Trump could not win, a touchy, bragging ignoramus could not possibly prevail against a candidate who embodied the political wisdom of the past 30 years. But in a talk in this series on the meaning of Trump in September of last year I suggested that Trump could well win because Hillary Clinton embodied this long-standing consensus. Though they were shy about revealing their intentions to pollsters I suspected that large numbers of American voters were so disgusted with the status quo that they would gamble on a demagogue many of the might not like or trust but who could be relied on to overturn politics as usual.

So far their gamble has paid of. Bizarre and chaotic as they've been, Trump's first weeks in office have shown no sign of scaring off many of those who voted for him.

In continental Europe the lessons of Trump's victory have yet to be learnt. Mainstream parties seem to be pinning their hopes on what some are calling 'a reverse domino effect' - a revulsion against Trump in which the political centre regains its hold in Europe.

This is clearly the hope of mainstream parties in France, which have reacted to the challenge of Marine Le Pen's National Front by putting up a succession of faded figures from the past as their candidates for the presidency.

After Nicolas Sarkozy and Alan Juppe fell out of the race Francois Fillon emerged as the saviour of the status quo. Fillon has since been mired in scandal and it's far from clear that he will make it to the run-off between the two strongest candidates in May. But even before his current difficulties he was not a sure-fire winner in a contest with Le Pen. Fillon is a Thatcherite who wants to install market liberalism in France. He's declared more than once that if elected he will fire half a million public workers and slash state spending. Would voters in France's large and powerful public sector back such a programme or would they instead opt for Le Pen, who has embraced the economics of the far left and promised to protect the French state and its workers? Even if these voters simply abstained they would weaken the republican front - the coalition of other parties that blocked Le Pen's father from power 15 years ago after he had broken through into the final stage of the presidential election.

With Fillon looking wounded and weak attention has turned to Emmanuel Macron, who is yet to declare any definite policies. Macron's record in politics is slender. As a former minister of economy his main achievement seems to have been partially deregulating shopping in a number of officially designated tourist sites. At the same time he's a classic French insider - a graduate of the École nationale d'administration, which trains the highest echelons of the French civil service. He's also a former banker.

For all his fresh-faced youth (Macron is still under 40) he's the perfect embodiment of the status quo. For that very reason he's also the perfect target for Marine Le Pen. Despite his relative political inexperience Macron is like Hillary Clinton in standing for a continuation of policies that have been pursued for decades. But he's up against a more formidable operator than Clinton faced in Trump. Though she claimed to stand against the established political classes, Le Pen is in fact a highly professional politician. By focusing relentlessly on the drawbacks of globalisation and the failures of the EU she will be able to cast Macron as one more figure from the past. At the same time she will stoke widespread fears of further uncontrolled immigration. If a credible candidate from the centre-right or centre-left was willing to break with consensus and demand radical change in European institutions Le Pen would be in a much weaker position. As it is she occupies a political space that centrist parties have unwittingly created for her. 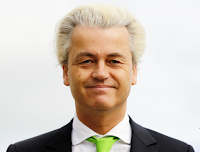 Le Pen is only one expression of a Europe-wide discontent. In Holland Geert Wilders anti-immigrant Party of Freedom could emerge from elections next month as the single biggest political force. At present it seems unlikely that either of these far-right leaders will be able to form a government. Even if his party is the largest Wilders may end up being kept out of government by a coalition of other parties. Even when up against a rival as insubstantial as Macron, Le Pen will struggle to reach a majority in the final round.

The danger at present is not that far-right parties will come to power. Instead, it's that their pivotal place in European politics is bringing the EU ever closer to a disorderly end. Any significant advance by far-right parties over the coming months will have powerful reverberations. Fearing that one or more country will have a referendum on euro membership global markets will attack the currency and sell of government bonds in those countries. The European project could be derailed by the very forces of globalisation that centre parties celebrate with leaders like Le Pen and Wilders having to lift a finger.

A spectre is haunting Europe - the spectre of populism. But it's a spectre that's been largely created by centre parties who have identified themselves with an unsustainable status quo.  By demonising discontent they've handed the initiative to extreme forces. The upshot remains uncertain. But one thing is beyond any doubt: We won't have to wait a hundred years for the European crisis to move to its next phase.
Posted by Craig at 07:10