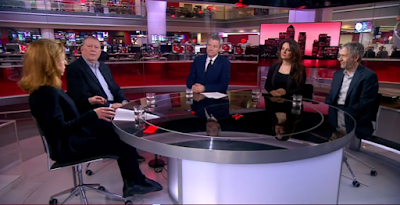 As for today's Dateline London I can spare you yet another of my posts about it by copying-and-pasting an excellent comment from Biased BBC which accurately sums up today's programme and expresses brilliantly many of the points I keep making about the programme (though, ideally, I'd still prefer it to be radically refreshed rather than scrapped):


Razza94
February 25, 2017 at 12:10 pm
Time to scrap Dateline London.
The show today has confirmed my longstanding belief that the show serves no purpose. It’s a good concept, but poorly executed. Instead of interesting debates over political issues, all I saw was a circlejerk. It had fours guests, none of them were British, and they simply agreed on everything. Corbyn is useless, the Blairites should return, UKIP are doomed, Marine Le Pen is bad, Trump is an idiot, Britain was stupid to leave the Euro, etc. It was simply group of people agreeing on a centre-ground liberal consensus, something which people across the world are now rejecting.
To make a debating format work, you have to have guests with strong views who disagree with on-another. Unfortunately the BBC as a broadcaster is unable to deliver on this. It is stuck in an outdated liberal mindset. The guests are recurring, and it seems as the though the BBC for pretty much all of its shows, has a list of “safe people” who will appear on their shows and avoid saying anything remotely interesting or controversial, instead they simply just broadly agree with the BBC and the mainstream media’s take on events.
It serves no purpose other than to create an echo-chamber so that the BBC can feel validated in its views.
Posted by Craig at 12:37