In March 2004 the BBC broadcast Out of Guantanamo: A Panorama Special.

It focused on the stories of two men. One (Moazzam Begg) was still in Guantanamo, the other (Jamal Al Harith) had just been released and reunited with his family in the UK.

You can read a transcript of the programme here, (h/t DB).

Jamal's story, of a boy from a Jamaican family who converted to Islam in his 20s, was told like this by the BBC reporter (Vivian White):

Jamal Al Harith was one of the five British detainees freed this week from Guantanamo. His journey there was an extraordinary one. Jamal comes from a West Indian family, and he was brought up in Moss Side.  He converted to Islam in his 20s and changed his name from Ronald Fiddler to Jamal Al Harith.

Jamal travelled widely.  He'd been to Pakistan and worked and lived in the Sudan. When he said that he was setting off again to visit a Muslim country just weeks after the attacks of 9/11 his family were worried.

He left Manchester within weeks of 9/11. He went to Pakistan and was trying to get a lift out of the country towards Iran when he was captured by some Afghanistan tribesmen. They handed him over to the Taliban who suspected he was a spy and put him in jail.

Jamal Al Harith from Manchester had become a prisoner of the Taliban. But after 9/11 the Afghanistan War broke out.

As the Taliban regime was attacked by the US led coalition for harbouring Al-Qaeda, Jamal Al Harith from Manchester was in a Taliban prison in Qandahar. After the Taliban regime collapsed, he was still in the prison, stranded, his money and passport stolen.  An American journalist discovered him there.

His family were looking forward to Jamal's release, but US special forces took over the former Taliban prison.

Jamal Al Harith from Manchester had been transported to Guantanamo Bay.

Last night five young Britons were released. Four were arrested under British anti-terrorist law  on their return. But Jamal Al Harith was simply questioned by the police and allowed to go.

After two years detention he was a free man, innocent, out of Guantanamo.

During the programme Vivian White asked Jamal's sister, "But the idea that really means he's a fighter, that seems ridiculous to you." She replied, "Yeah".

A man in the wrong place at the wrong time, clearly.

Fast forward 13 years, and the main story on the BBC News website tonight is: 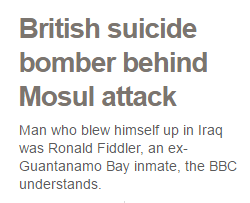 That suicide bomber is said to be the self-same Jamal Al Harith.

He died fighting for the most brutal terrorist organisation in the world, Islamic State.

Oddly, other than a couple of mentions of his nom-de-guerre "Abu-Zakariya al-Britani" and a single mention of "Jamal Al Harith", this BBC online report refers to him throughout as "Ronald Fiddler" or "Fiddler". That 2004 Panorama, however, said he changed his name to "Jamal Al Harith" even before 9/11.
Posted by Craig at 19:01