"Is Evan Davis on the verge of a nervous breakdown?" 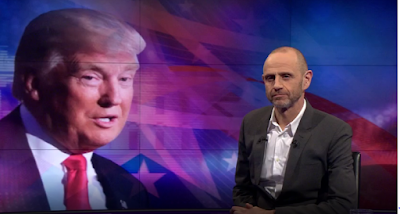 Last night's Newsnight began with Evan Davis asking the question, "Is the President on the verge of a nervous breakdown?"

This was followed by a clip of Donald Trump saying:

There was an extraordinary press conference this evening. It sounded a bit like ranting and raving, as President Trump tried to show his administration is on the right track.

Then came another clip of Donald Trump:

Politically, it would be unpopular for a politician to make a deal. I can't believe I'm saying I'm a politician, but I guess that's what I am now.

We'll ask if it was as strange as it looked, or if this is just the new way of doing things. Then, at the other extreme, there is the Theresa May approach to communication - not to have any. She's keeping remarkably quiet. It's a going dark strategy. We'll ask if that looks business-like, or simply leaves a news vacuum to be filled.

Hello. We all know that President Trump's way of communicating breaks the normal conventions. This was a bit different - a bit weird...80 minutes of press conference that, at times came across as paranoid or meandering. There were, buried within, some substantive messages. He said his administration is a fine-tuned machine, the travel ban was introduced smoothly, he knows of no contact with Russia by his campaign staff. Also, he's achieved a lot for jobs and security. But the core was not all that, it was him lashing out at the press, fake news, the leaks, judges, the Democrats, the state of the world that he inherited, and the press some more. I'm not sure how well short sound bites capture it, so here's a longer taste.


Now one thing he did - a little strange in itself - was hark back to his election victory.

And his first question to Sebastian Gorka was:


Do you think his press conference was a bit unhinged, Mr Gorka?