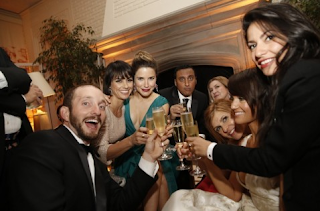 A bit of anti-Trump sarcasm from Broadcasting House guest presenter Jane Garvey was only to be expected, but her interview with Mark Mardell about the White House Correspondents' Association dinner was quite revealing about that annual event and, I thought, worth posting.

Look out for Mark Mardell admitting to behaving "slimily" towards a senior Democrat. How unlike him! (And that's sarcasm too, Jane!)


JANE GARVEY: This is Jane Garvey for Paddy O'Connell on Broadcasting House this week. And we'll pick up on the news that Donald Trump has announced that he's not going to go to the White House Correspondents' Association dinner in April. He wrote on Twitter - where else? - "Please wish everyone well and have a great evening". According to the New York Times, every sitting president since 1924 has been to the event at least once. President Obama went 8 times and in 2011 he made a string of jokes at Donald Trump's expense, and Mr Trump was in the audience.

BARACK OBAMA: No one is happier, no one is prouder to put this birth certificate matter to rest than The Donald. And that's because he can finally get back to focusing on the issues that matter, like 'Did we fake the moon landing?', 'What really happened in Roswell?' and 'Where are Biggie & Tupac?'

JANE GARVEY: President Obama in 2011. Well, Ronald Reagan was the last president in office not to go to the shindig. That was in 1981, but then he had just been shot - and he still phoned in to the event. Mark Mardell was the BBC's North America editor - and, coincidentally, is presenting The World This Weekend today, so Mark, good morning to you.
MARK MARDELL: Good morning.

JANE GARVEY: What's going on here, because the dinner is not until April? Why say he's not going now?
MARK MARDELL: Well, because it is a huge date in the correspondent's diary. They just love it. It's not just some little dinner. It's...The President's there. All the top politicians are there. All the networks try to get superstars from stage and screen on their tables. There are pre-parties and after-parties. It's glitzy and glamorous. They dress up in their sparkliest dresses and their black tie. So it really matters to them, and, sort of, the overarching feeling is 'We take chunks out of each other during the day but, you know, we're all chums, we're all friendly really.' It's a town that worships power. And what he's doing is really...it really will offend them. But it's also important because he's saying to his supporters, President Trump is saying, 'I'm not going to sup with these swamp dwellers. I'm not chummy with them. I really do dislike them. I'm going to snub them.' And that will go down terribly well with his supporters.
JANE GARVEY: And, of course, we're talking about it, which some people might think is, well, a good thing for Donald Trump. This is a distraction, and it's worked.
MARK MARDELL: Yeah, I think that's right. There are other more important stories around, doubtless, that he's...particularly, you know, for Americans, stuff that he's doing in America, and the correspondents are going to be in a tizzy about this, cos...you know, nobody...I mean, journalists love a story that's about themselves, that affects them. They realise how much this matters to them, so they'll go on and on about it. But it does matter because it's a message that he's sending up to his heartland as well.
JANE GARVEY: You've been to these dinners. Are they and good?
MARK MARDELL: They're tremendous fun in one way, because the stars are all there, and I was quite lucky not to be on a bad table, because the year before, the BBC, a big executive had come over and he got put next to the toilets and his chair kept on being banged by the waiters, so...We must do better this year. So it was a bad table. The food's dreadful. it really is. They don't spent time asking you what you want so you get fish and meat, covered in gloop. But you do get to meet people. The fun is trying to introduce yourself to politicians who clearly don't want to meet you. I went up to Leon Panetta, and I congratulated him on something rather slimily and I..just 'good campaign!' and all that...and he looked really shocked and surprised. And it turned out he'd just been appointed director of the CIA and nobody was meant to know for a few days. And, of course, I didn't but he thought I'd got a scoop.
JANE GARVEY: You work for the BBC. I'm sure you did know really, Mark. What about this business on Friday then? Excluding some organisations, including the BBC, from Friday's press briefing. Are press briefings at the White House really worth going to? I mean, when was the last time a brilliant story emerged from one of those things?
MARK MARDELL: I think that the...I can see why people want to go along, because if you analyse day by day what's being said then you get some sort of picture of the administration and the faults within it, the flaws within their logic. So in those sense, it is. But it's also a game, part of the Washington game. These seats are precious. If you don't use it you lose it. So people want to sit there and want to be there. And, of course, as you know, it's not about the answers. It's about being seen to ask the question, isn't it?
JANE GARVEY: That kind of thing would never have occurred to me, Mark.
Posted by Craig at 13:04