Enemy of the BBC 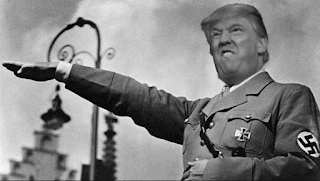 The BBC News website has recently published a piece headlined:

In it, historical uses of the "chilling phrase" - from Hitler and Stalin to Mao - are detailed and a series of hostile criticisms of the President are quoted. (There are no balancing defences of the President).

The anonymous BBC reporter's description of the man who opened fire in a pizza restaurant last year (Edgar Maddison Welch) as "a Trump supporter" is something I've not been able to verify. (Can any of you find proof of this? You may succeed where I failed.)

He seems to have followed conspiracy theorist sites and to have believed this particular conspiracy theory about Hillary Clinton, and to have been highly religious, and to have been a registered Republican, so he may very well have voted for Donald Trump, but this BBC article is the only mainstream media source I've found so far that says for certain that he was "a Trump supporter", and that describes him as such. (Has the BBC fact-checked this?)

NewsSniffer shows that the piece has been toned down slightly. It originally included a paragraph saying:

Mr Trump's anti-immigrant rhetoric and policy have led to comparisons, from some quarters, with the rise of the Nazi party in Germany.

...but this was removed some 35 minutes after the article was first published.
Posted by Craig at 15:22