Was the BBC biased over the Budget? 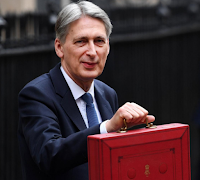 The pressures of extra hours at work (employed not self-employed) has kept me away from the blog for a few days (have I missed anything?), so it's 'catching-up' time again...

The Budget has been the big domestic news story of the week. My Twitter feed showed that something remarkable had happened when hordes of right-leaning tweeters were pouring derision on Philip Hammond for his NICs rise on the self-employed while a few prominent left-leaning tweeters were advising others on the Left to consider that Mr Hammond was actually doing something 'progressive', something they could and should approve of.

The BBC's News at Six on Budget Day opened with the following strongly-angled headline:

The Chancellor's Budget .2.5 million self-employed people will pay higher National Insurance contributions. That's despite pledging not to raise National Insurance in the party manifesto. But Mr Hammond says his Budget promises a better future. An extra £2 billion is found for social care in England to be spent over the next three years. We'll be looking at the impact of today's Budget and how it could affect you.

BBC bias? Fair comment? I'd go for 'fair comment' here. It's the angle everyone else seemed to be leading with and 'everyone else' was calling the Chancellor out of that too (and, if I'm expected to give opinions, I'll add 'And quite right too!' on the manifesto point).

The loudest accusations of bias against this bulletin came from the Left, especially for John Pienaar's opening report, which Corbynistas accused of being 'pro-Tory' and 'anti-Corbyn' - especially for highlighting the mockery at Mr Corbyn's expense and for saying that Mrs May "rightly or wrongly, seemed to see Labour's leader as a bit of a joke".

(Was that biased? Or was it balanced? I can't make up my mind. It's certainly a striking turn of phrase.)

Here, for the record, is John Pienaar's report - or at least his parts from it. Please judge for yourselves whether they constitute pro-Tory/anti-Corbyn bias or not:

The other 'big thing' I noticed about the Budget was Norman Smith's characteristically hyper Twitter commentary.

Here, in reverse chronological order, are Norm's tweets as the Budget proceeded.

If the jury's still out on whether Jon Pienaar was making particular points there, there's no doubt whatsoever that Norman was most definitely trying to make a point here.

Now, many (including me) would agree it's a valid point Norman Smith was plugging away at so relentlessly here, but was he doing so for purely journalistic reasons or was he displaying 'anti-Tory bias'?

(He was certainly being opinionated. That's for sure!)