Emily throws caution to the wind 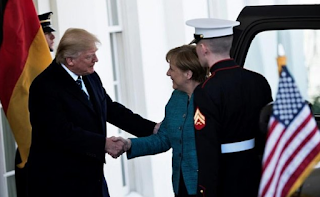 ...and their press conference ended with another handshake: 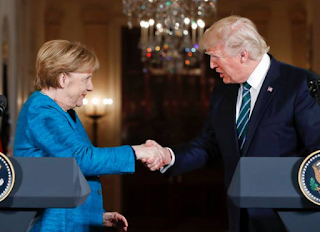 In between came an awkward moment when it appeared that Mr Trump ignored Mrs Merkel's request for a handshake for the photographers, though media reports have generally pointed out that it was "unclear whether or not Trump heard the chancellor".

Of course, that non-happening of the middle handshake 'went viral' as The Big Story of the Day, Trump-wise. Thus, it was inevitable that Emily Maitlis's 'bit from America' on last night's Newsnight would begin by referring to it, sarcastically.

Unlike cautious reporters elsewhere, however, Emily appeared to have no doubts whatsoever that it was a deliberate snub by President Trump:

Good evening from Washington. In recent times, President Trump has shown himself a rather enthusiastic advocate of the handshake. Sometimes they've appeared to go on painfully long. But today was not one of those times. He rejected the formal clinch with German Chancellor Angela Merkel, and the two faced off in a rather awkward tension - to the shout of "handshake!" from press photographers - mirroring in their body language what we know already of their political differences.

That's the sort of thing that might get Donald Trump tweeting about "the FAKE NEWS".
Posted by Craig at 15:45