At the time of writing there are over 12 jam-packed Google pages about the new Walled Off Hotel.  A brilliant propaganda coup for Banksy’s publicity officer. Does he have a publicity officer?

On this occasion I have to report that the actual BBC was the least bad of a bad bunch because its report largely consists of those ghastly photos with captions, whereas the rest of the press obediently parrot the press release verbatim and at length. “The hotel with the worst view in the world” etcetera etcetera.

The hotel is an amalgamation of Banksy’s dystopian (deliberately ugly) Dismaland  and assorted crass anti-Israel propaganda.  Completely one-sided, crude and inflammatory.
Dispensing with even the most rudimentary attempt at wit or irony,  the famous BBC test-card is displayed; instead of those naughts and crosses, Banksy has chalked: “Free Palestine”.

The publicity for this  “hotel” is a masterpiece in PR. How on earth does he do it? Every news outlet in the entire planet and beyond has fallen for it.

Tacked on at the end of most reports was something about encouraging “dialogue”. Those aren’t entirely my own scare-quotes so I don’t think I’m the only one who sees this as an afterthought, a last-minute attempt at damage limitation.
You’d have to be even more dumb that your average sucker-for-this-kind-of-stunt if you believe this self-indulgent agitprop had anything to do with encouraging dialogue. Well, not the kind of dialogue that this is meant to imply.

Banksy is the Roger Waters of the “art” world. An even more overrated version. To paraphrase what someone once said of Stephen Fry (and someone else said of Aldous Huxley) “Banksy” is a politically and visually illiterate person’s idea of a cutting-edge visual/political satirist. 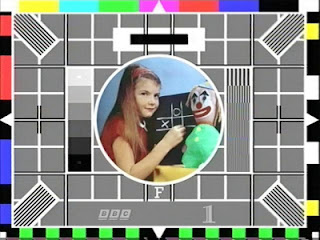 Update (Craig butting in): This was the report about it on last night's News at Ten. It comes from the BBC's Westminster correspondent Alex Forsyth. According to her Twitter feed she's "currently based in Beirut" but will be "returning to Westminster in the spring". So it looks as if her first reporting job "in Beirut" was to rush down to see the latest West Banksy. Interesting priorities! 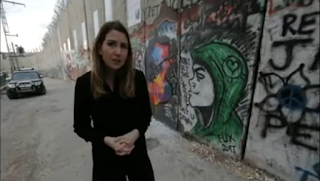 NEWSREADER: His works already adorn walls the world over. Now the elusive graffiti artist Banksy has gone a step further and opened a hotel next to Israel's separation barrier in Bethlehem, which cuts through the occupied West Bank. It's a hotel with a political message and is proving a controversial addition to the city's tourist itinerary, as Alex Forsyth has been finding out. ALEX FORSYTH: Steeped in irony - an artist's take on the grand hotels of a bygone age. This one claims to have the worst view in the world. The concrete slabs of the barrier Israel has built in and around the occupied West Bank are just feet away. This hotel as much a political statement as a new business. Inside, echoes of an English gentlemen's club. But the artwork is a sharp contrast. Banksy's critical view of life under Israeli occupation, designed to persuade visitors of the Palestinians' plight. HUSAM ZOMLOT, Palestinian presidential advisor: As you lay down on your bed you'll look at the wall and you'll look at the paintings all around you, and you'll see the agony and the images of what could be a different future. And I believe that is the best mobilisation message for people to get on their feet and act. ALEX FORSYTH: The elusive artist has left his mark in the West Bank before. There's even a shop selling his merchandise in Bethlehem. His provocative art - not always popular - does attract attention. When Banksy's work first appeared here in the West Bank and then in Gaza, there was some concern he was depicting Palestinians as downtrodden, and some criticism in that by painting on the wall he was somehow normalising it, even making a feature out of it. And from an Israeli perspective, undermining something they see as essential to their security. The architects of the controversial separation barrier have always defended its existence. DANNY TIZRA, architect of separation barrier: We had so many terror attacks from the West Bank to Israel from 2000, until 2006, and even these days, there are still terrorists that are trying to cross from the West Bank to Israel and we have to stop them. ALEX FORSYTH: But for critics the barrier's an infringement on freedom, a reason to protest, and now, an experience to pay for, with prices from tens to hundreds of pounds a night, for a room with a view. Alex Forsyth, BBC News, Bethlehem.