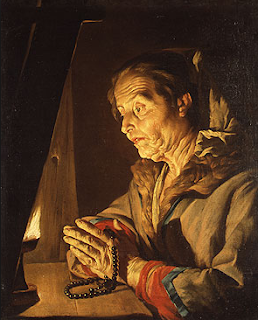 This morning's Something Understood looked at piety. It's well worth a listen.

Mark Tully, a spiritual man in the Prince Charles manner, all-embracing in his reverence for world religions, brought us gifts of lovely music (from Bruckner to Rutter, from Vaughan Williams to The Mavericks, from Rossini to Islamic rap) plus plenty of thought-provoking poetry and prose.

Mark was making a defence of sincere piety and the benefits it brings to all of us, believers and non-believers alike, in terms of culture and personal inspiration.

The featured spirited defence of Christian monasticism against those who pour scorn on it struck me as powerful but I got stuck on the point that those who don't believe the truths of Christianity (which our monks and nuns are trying to live and breath) are somehow wrong to doubt the point of such a wonderful, rigorous, fulfilling way of life if those truths aren't in any way true at all. Surely whether they are true or not has some bearing on the ultimate value of monastic living?

There was also an Islamic parable about an ostentatiously pious Muslim who has a dream about a another man - a Muslim shopkeeper - being even more pious than him. As he can hardly believe it to be possible, he goes to find this shopkeeper to see if it's true and finds him busy serving his customers and being cheerful, so doesn't think he can be that pious. He tells the shopkeeper his dream and the shopkeeper has a knowing look in his eye. The shopkeeper says he'll only explain his piety to the pious man if the pious man carries a bowl of mercury up and down a long street without spilling it for an hour. The man, with great effort, finally achieves that task, huffing and puffing with anxiety, and then the shopkeeper explains. Did you think about Allah when you were performing that task? No, said the pious man, I was too busy thinking about not spilling the mercury and getting back to your shop in time.  Ahh! but I am carrying mercury around in a bowl all day and I think about Allah all the time, including when I'm doing my daily duties, such as serving my customers. Now, the moral there was that the shopkeeper was better than the ritual-observing, pious man, who was a hypocrite. Hearing the story, however, and clearly unlike Mark Tully, I found myself warming to the poor harmless hypocrite. The shopkeeper sounded insufferably smug to me, and not very pleasant. Fancy putting someone through such an ordeal simply to prove that you're more truly pious than they are - and ensure that they know that you know that they know that you're more pious than them! What a pompous oaf!

Then came a piece extolling the virtues of the women's mosque movement in Cairo - an Islamic revivalist movement which aims to counter the immoral secularising, Westernising trends of the last century and teach Egyptian women how to be pious and live good Muslim lives in a modern society...as if this kind of thing has been necessarily a wholly good thing in Egypt over the last forty or so years! There was not a whiff of the possible - and actual - risky consequences of such Islamising tendencies from Something Understood here, alas.

As I say, it was certainly thought-provoking. How sensible my thoughts are about any of what I heard I'll let you be the judge though.