"I'm not going down the usual road of whipping up outrage" 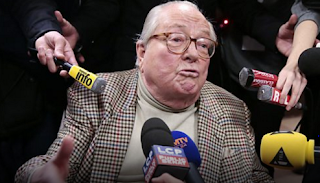 This morning's From Our Own Correspondent featured a highly informative profile of Jean-Marie Le Pen from the BBC's Paris correspondent Hugh Schofield.

It was also a highly unusual profile (for a BBC reporter) - as Hugh himself noted:

I'm conscious in writing this that I'm not going down the usual road of whipping up outrage against this "racist, antisemitic throwback" - and some listeners may feel I'm letting the man off lightly. But, to be honest, I think it's more useful to explain the appeal.

And 'explain the appeal' he certainly tried to do.

It's not often that you hear a BBC report which asks the question "Is he racist?" about M. Le Pen and then answers its own question by replying "Not really" - and, even more unusually, that does so after first saying "whatever that means" about the word 'racist'!

(Complaints will doubtless be sent to Feedback.)

The piece is also unusual for featuring the word 'contumely'.


KATE ADIE: The leader of the Front National, Marine Le Pen, is favourite to come top in the first round of the French presidential election next month. It's an extraordinary turnaround for a party and a name which just a few years ago was regarded as untouchable. It was only after she broke ranks with her father, Jean-Marie, two years ago that Marine was able to pose as a normal political leader. She expelled her father, its founder, from the party after he made controversial statements in which he described the gas chambers of the concentration camps as "a detail of history". Yet at 88 Jean-Marie Le Pen is still going strong, and still sure of himself. And, as Hugh Schofield found when he went to see him, Le Pen Senior remains proud to be an outcast.

HUGH SCHOFIELD: Not a lot of people know this but Jean-Marie Le Pen was the man who introduced France to the duffel coat. There are pictures of him wearing one in about 1950, when he was leader of the law students union in Paris. Being from the Brittany port of La Trinité-sur-Mer and being the son of a fisherman (killed by a German mine in the War incidentally), Jean-Marie always had a strong affinity with the sea. After the War he crewed in cross-Channel yacht races, and on one of these he ended up in Plymouth - or "Plee-Muss" as the French pronounce it. And there, in a navy surplus store, he picked up a duffel coat, replete with toggles, for the princely sum of two pounds. A few weeks later Le Tout-Paris was goggling at the toggling as Jean-Marie set about his career as France's longest running political ne'er-do-well.

I got this story from him over an afternoon of chat in the upstairs office of his house in the posh western Paris suburb of Saint-Cloud. Like everything else about Jean-Marie Le Pen the house is itself larger-than-life - a crumbling, dark Gothic pile on a hill overlooking Paris. In his office he has a pair of massive binoculars trained on the capital.

And it's all highly symbolic, because in his life too Jean-Marie has always been on the outside looking in on the world of power. He could have been part of it. Back in the duffel coat days he was following the same path as a hundred other political luminaries, with whom he later stayed on perfectly civil terms. But something about him impelled him to the edges. He couldn't stand being part of the in-crowd. As he likes to remind you the very name 'Le Pen' means 'chief' in the Breton language, and Jean-Marie always needed to be the chief.

I imagine even in choosing the duffel coat from Plee-Muss he was signalling to his Paris coterie that he was different. There was a gap in the political market back then and Le Pen saw it as his opportunity.

After the War the national story was being told by the victors - General de Gaulle and the communists. They were the ones who could say they'd resisted. But what Le Pen spotted was a big section of opinion that was silently unhappy about that. Not that many people had actually resisted in the War. Most did nothing. Many supported Vichy. So in the 50s there was a section of the French population that felt sullen and unrepresented. Le Pen became their spokesman. And in doing so he was instinctively taking up a strand of politics that was totally out of fashion but we had a long history in France - nationalist, traditionalist, populist.

Everything that followed sprang from that gap in the market - his doomed espousal of empire (Le Pen fought in France's last three colonial wars - Indo-China. Suez and Algeria), his rejection of the EU (he is the last active politician - he's still an MEP - who voted against the Treaty of Rome in 1957), his dire warnings about immigration and, yes, the endless provocations. The jibes about Jews ended up destroying Le Pen's career but, in a way, they were part of the whole. That constant desire to shock was a way of setting himself apart from what he saw as a hypocritical ruling establishment.

I'm conscious in writing this that I'm not going down the usual road of whipping up outrage against this "racist, antisemitic throwback" - and some listeners may feel I'm letting the man off lightly. But, to be honest, I think it's more useful to explain the appeal. Le Pen is a charming, funny, articulate old man whose knowledge of French language and history are of a high order. It was Francois Mitterand who said only two politicians could speak French properly: him and Le Pen.

Is he racist (whatever that means)? Not really. He tells the story of how in the Suez War he won plaudits from the Egyptian population because he was the only French officer who took time to bury their dead according to Islamic rights.

What he is is a nationalist. And if that means relegating people from other nations down his pecking order of who gets what in France then he sees that as perfectly reasonable. Nations, he says, were for long years the butt of general contumely but now they're coming back.

Labels: 'From Our Own Correspondent', Hugh Schofield