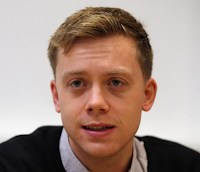 I must admit, partly from watching YouTube videos of his interviews with people who don't share his views and seeing him (so often) on TV, that I've grown to like Owen Jones more and more as time passes. And he's been changing his view of his ideological friends too, given that they've been beastly to him on Twitter - which he's now left, pursued by a bear.

“On a daily basis I have angry strangers yelling at me, on the one hand, that I’m responsible for the destruction of the Labour Party, and on the other, I’m a right-wing sellout careerist who’s allied to Tony Blair and possibly in the pay of the Israeli government (and that I’m a Blairite c*** who needs to go fuck myself, and so on and so forth)…

“Both my parents are staunch supporters of Jeremy Corbyn; they’re leading members of their local Momentum branch. They don’t agree with lots of what I’ve said. Unlike the increasingly frothing keyboard warriors, neither doubts for a second that what I says comes from the heart…

“I’m just wasting my life. I wouldn’t choose to walk every day into a room full of total strangers screaming mindless abuse and making up what I think and what my motives are, but in a sense that’s what I’m currently doing.”

Imagine my surprise then (not that you'll need to as I'm now describing it) when I read this at Not a Sheep's blog: 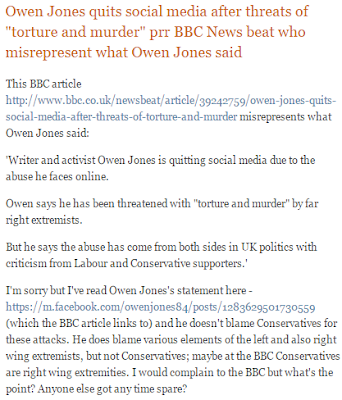 So where did the BBC get the idea that he blamed "Conservative supporters"?

All I can say is whoever at BBC's Newsbeat wrote that article clearly misread Owen's post, and that their misreading is either due to carelessness or bias - or, my personal bet, both carelessness and bias.

The other curious thing about the BBC article (following on) is that it chooses to place the far-right angle as its lead angle whereas Owen's Facebook page makes it clear that it's the far-left that's been the straw that broke his camel's back and which mainly prompted his departure from Twitter.

So why the opening paragraphs quoted at the top of this very post?
Posted by Craig at 18:31