Katty Kay didn't look before she leaped the other day. 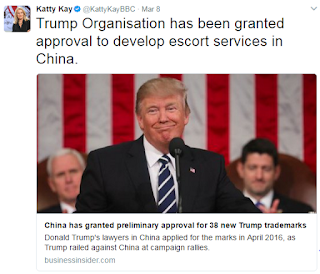 Her followers on Twitter, naturally, piled in with jokes about "President Pimp" and the odd nasty dig at Melania Trump.

Three hours later, and to her credit, she tweeted a correction: 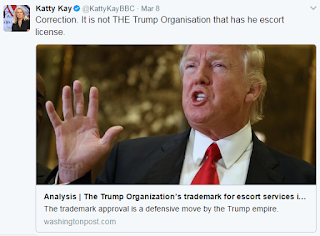 Her prompt correction saves her from the accusation of promoting 'fake news', but there's surely more than a grain of truth to the following complaint:

She certainly did appear to pounce on - and promote - the most lurid angle of a less-than-entirely spot-on piece of non-BBC reporting (in which the potentially lurid element only appeared as a passing detail).
Posted by Craig at 15:03