Katty Kay and the Swedish integration minister both get things wrong 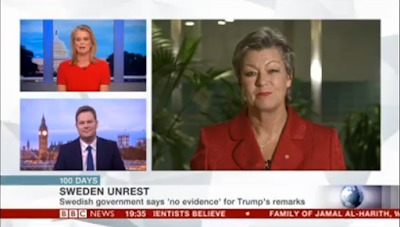 Breitbart London has a story today in which it claims that the Swedish integration minister "admits lying" to the BBC about her country's rape statistics.

The story relates to a 100 Days interview on 22 February with Ylva Johansson:

KATTY KAY: Minister, I wanted to put to you something Nigel Farage, the former leader of the UK Independence Party has said about Sweden. He has called Stockholm "the rape capital of Europe, possibly even the rape capital of the world". His implication is that actually with an influx of immigrants and particularly a lot of young male immigrants, the crime rate, particularly around sexual crimes, has risen in the capital.
YLVA JOHANSSON: He does not really know what he's talking about. When we make service about... If any woman has been... If there has been a rape towards her and sexual harassment, we can see that the level is going down and going down and going down. But we encourage women to actually report to the police and we also broaden the scope of what we define as a rape, because we would like every woman, because every rape is one rape too much. We encourage every woman to report to the police so we have a high level of reporting to the police and it is good they report and, of course, it is bad if rape is committed, but when we make service at the actual level of rapes is not high in Sweden.

As far as Katty Kay is concerned here, she got her facts wrong there. Nigel Farage has never said any such thing about Stockholm. He's said it about Malmö, Sweden's second city.

Is Breitbart engaging in fake news about Mrs Johansson though? (I always feel the need to check with Breitbart).

Using Google and Google Translate, the report on what she said in Sweden's leftist tabloid Aftonbladet confirms that the Swedish minister said that she got it wrong ("It was wrong of me to talk about a development based on one year") and that official statistics show that reported rapes have risen over the last decade, and rose again last year.

It also notes - interestingly - that the Swedish Moderates, forcing her admission (along with a similarly disbelieving criminologist and a journalist), described her BBC remarks as "fake news", and that the paper says that President Trump's comments have provoked "a major debate" in the country "on the image of Sweden and the country's potential problems of integration and crime".

It will be interesting to see if any of this gets reported by the BBC.
Posted by Craig at 20:43