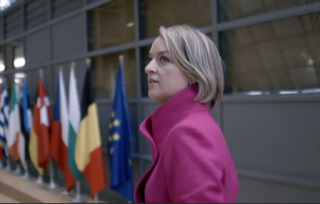 I didn't watch it at the time but saw the deluge of Twitter comment about it and noticed that, by and large, pro-Brexit people appeared absolutely appalled by it while anti-Brexit people seemed pleased by it.

(I smiled at one of the latter, Twitter-feed header emblazoned with EU flags, saying it was 'balanced' and much better than Katy (sic) Adler's programme).

So was it biased or balanced?

Well, having finally caught up with it, I have to say that I can well see why pro-Brexit people were so unhappy with it.

Doom and gloom predominated. The early stages of the programme were devoted to the alleged massive bill we'd have to pay to the EU to leave, with Laura carrying around a large cheque and saying, "So we have a cheque here for £50 billion to the European Union that UK taxpayers might have to pay to the rest of the EU to get out". She showed it to various aghast vox pops, whose responses ranged from "We've been lied to" to "I voted Out, so it's all my fault, I apologise" via "I can’t believe it. We would have heard about that before, surely?", "Cheap at the price to get out of Brexit, yes", "Well sod ‘em", "You just need to be tough, the same as any business deal" and "We should never, ever have given us a referendum (sic) None of us are educated enough to vote on something so serious". The House of Lords report concluding that we won't have to pay ten of billions of pounds to get out didn't even get a mention.

Among the arguments for the defence is that, contrary to some of the comments I've read, the programme did feature a range of voices. However, the balance (excluding vox pops) was hardly fair:

Surprisingly, no one from UKIP was interviewed.

Missing from the above list was the programme's legal expert - the disinterested expert - namely lawyer Jessica Gladstone of Clifford Chance. What Laura didn't let on about Clifford Chance is that they were one of the few law firms that took a public stance during the EU referendum: to oppose Brexit. Her points on this programme, unsurprisingly then, sounded strongly negative on Brexit and she should be added to the 'Remainers/pro-EU' column. 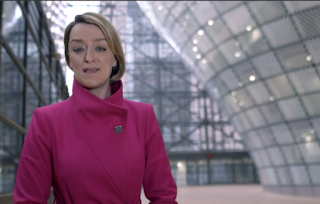 Also, it's indisputable that the Leavers were cross-examined by Laura K much more often than Remainers - and in a much more challenging way. Compare, for example, the following lead-ins/questions to prominent Leavers:

To Michael Gove: You were the chair of the Vote Leave campaign, you gave people a sense of expectation we were going to get money back. Now, won't it be rather embarrassing for you if instead we end up being asked to shell out to get out of the thing?

To Michael Gove: But if we have to pay a one-off fee of some billions, won't some voters who were persuaded by your arguments have every right to feel pretty cross with you?

To Lawrence Tomlinson: In terms of the length of time it’s going to take, you know, some people say this might take as long as a decade, it's going to be very complicated and that delay is going to mean uncertainty and that can be really damaging.

To David Davis: For swathes of voters, though, shouldn't you be preparing them for something that feels rather different to what they think they were promised? I mean, might we not end up with a bad compromise here where significant level of immigration remain over time so that business doesn't lose out, but then also a new bureaucratic system of dealing with work permits and visas for business? That's not going to be a great compromise for anyone, is it?

To David Davis:You are acknowledging, very publicly, there is a real risk of what's known as the cliff-edge? We walk away without a deal and some people say that's a catastrophe even to contemplate that.

To Boris Johnson: For many big British businesses the Single Market has been hugely beneficial. We are walking away from the biggest trade partnership that exists. Will you admit there will be losers as well as winners? We cannot get a deal that is going to be as good as our current relationships inside the Single Market.

with these to leading Remainers:

To William Hague: It sounds like a diplomatic mission from hell, a nightmare?

To Tony Blair: Do you think that we are potentially at the start of a really fundamental reshaping of British politics?

To Tony Blair: Since the referendum, the government’s tried to reassure individual industries they won’t lose their workers. But does that mean immigration won’t fall?

To Tony Blair: But Theresa May's decision to leave the single market and what's called the customs union could force a return to a hard border [with the Republic of Ireland], with echoes of the past.

To Jessica Gladstone & Tony Blair: If there is no deal, that only leaves one option: the cliff edge.

And those are representative examples.

Above all, it was Laura K's own narration that steered the programme down the biased path. It accentuated the negative from the very start and continued throughout.