You know the one where we complain that the BBC is usually way behind other media outlets when it comes to naming the attackers in an Islamist terrorist attack, well, Channel 4 News (of all people) inadvertently sounded a corrective warning about going too soon with names this week by reporting the wrong name for the Westminster terrorist.

I saw that unfolding on Twitter. People began putting the wrong name out there. It began spreading like wildfire. I spotted some well-known journalists on my timeline starting to draw conclusions based on the wrong name. Then the controversial ex-Newsnight reporter Secunder Kermani (now a BBC Pakistan correspondent) interjected on Twitter: 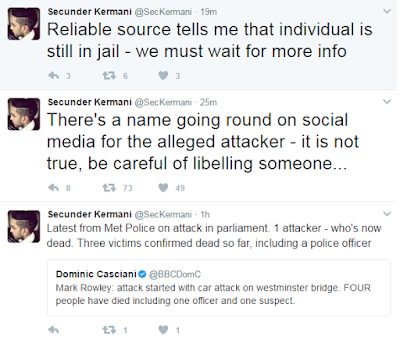 Shortly after it was tweeted that Channel 4 News was naming names. Jon Snow announced it straight away. Simon Israel reported it. And then it all fell apart for Channel 4, with audible screech marks being applied as the programme went on and an apology being aired the following day.

That came a few hours after a salutary experience I had at work. The first I heard of the attacks was two guys talking about something on the news. One of them said that the BBC was behind with the story. The other said that the BBC isn't very good at breaking news. They both then agreed that this was because the BBC is a more responsible broadcaster than other media outlets and that they check things before reporting them, and that checking things takes time. They both thought that this is a good thing.

That, of course, made me think at the time that the BBC still has the trust of a lot of people and that the BBC's defence for this kind of delay in reporting things like the suspect's name - that it's them being a more responsible broadcaster than the rest - does (and will) clearly strike many people as not just a good defence but also the only right-and-proper way for a broadcaster to actually behave.

Channel 4's humiliation will only have reinforced that feeling with such people...

...and will have given pause for thought to others too (like me).

However, the BBC also has a record of not holding back like a responsible broadcaster. It can speculate as wildly as anyone when it (wrongly) suspects (say) a 'white, right-wing' attacker.

Moreover, the BBC's record of censoring vital details on these kinds of story has a long and undistinguished history.

This blog has laid out countless examples of such behaviour (some examples here and here and here and here), and that goes beyond being a responsible broadcaster and pursuing a 'verify, then verify again' approach to breaking news into out-and-out massaging of stories in pursuit of an agenda - usually, in this case, to 'promote social cohesion'.