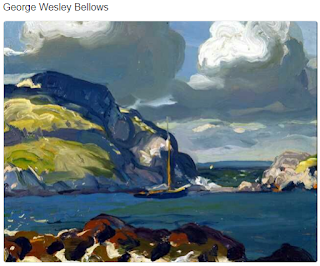 Radio 3's The Verb can often be worth a listen.

It helps that I'm a big fan of Ian McMillan, the Bard of Barnsley (and a very regular BBC regular) - especially his delightful Twitter feed.

If anything justifies Twitter (and plenty doesn't) then it's Ian's Twitter feed with its stream of poetic nibbles, jokes, friendly replies, interesting links, miniature reviews, and lovely unfamiliar paintings. It's a daily pick-me-up.

I hope he's keeping a record of them because they'd make a great book. Here's a sample, just in case he isn't.

He always starts the day, just as I'm getting up too (around 5.30!), with an "early stroll" and is usually at his most poetic first thing on Twitter.

And, as I see most sunrises at the moment, I'll very drawn to his take on them (mostly from the other side of the Pennines).


And to end, a short impromptu early Sunday morning poem: