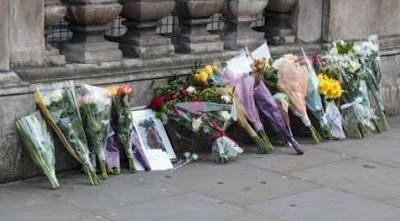 I must admit the Guardian is good at this type of story.

A terrorist rams his car into a crowd. Then he steps out and starts knifing civilians.


That was Wednesday in London, but in Israel it can be any day of the week.

So the terrorist attack at Westminster outside Parliament, which killed four, would surprise no Israeli, particularly as to this pattern of terrorism. In Israel it’s been going on for years…deadly car rammings and indiscriminate knifings as a method to strike fear into the heart of an entire population.


Now the entire world knows how it feels, but it all begins in Israel, where Islamic terrorists try out new tactics to see how the rest of the world will respond. I call it spring training for Radical Islam. If the response is full support for Israel, we win, they lose.
But if the world says the terrorists had an excuse…if the world says Israel must give up more land to pacify Muslim extremists…we lose, they win.


So yesterday violent Islam won again, this time in London, from where the UK’s foreign secretary, Boris Johnson, only a few weeks ago, warned Israel that it must absolutely abide by a two-state solution – must split itself in half to make happy Hamas, Abbas, the PA, the PLO and the rest of them that seek Israel’s destruction – along with the rest of Western civilization.
Does nothing get learned?

Here is another version of the emergency plan graphic I posted earlier:

“According to an Associated Press article focused on other examples of vehicle attacks around the world, the London attack “was the latest in a string of incidents in which drivers used their vehicles as weapons.”

But which country is conspicuous by its absence?