Have YOU read anything by David Goodhart?

His forthcoming book “The Road to Somewhere: The populist revolt and the future of politics”  was plugged on Start the Week yesterday morning.
Goodhart looks down from heaven at all mankind. Much as he tries to hide it, his approach to the “Somewheres’ sounds patronising. The peasants are revolting, and they wreaked their revenge by by voting Brexit.

My impression was of a simplified analysis that conveniently put us into two groups, by implication ‘good’ and ‘bad’, which came across as heavy-handed and insulting. Too neat and tidy, and smug. Then someone - possibly by Andrew Marr - boosted that impression by casually remarking that “Leave” voters tend to approve of Capital punishment.

I freely admit that I may have misunderstood the whole thing. Correct me if I’ve got it wrong, but I thought David Goodhart sees the “Somewheres” as parochial, narrow-minded and bigoted, part of ‘the hang-em-and-flog-em brigade’, whose brains are addled by ignorance and fear of the unfamiliar.
Mind you, he did concede that extremism in the  “Somewheres” only represents a small minority of the Somewheres. (In other words extremist ‘Somewheres’ are Nothing To Do With common ‘Somewheres’)
The “Anywhere” lot, on the other hand, are the open-minded liberal elite, the ‘anywhere I hang my hat, that’s my home’ brigade. They the are right-minded globalists who love adventure and are open to new ideas and dismissive of the old; they are the moral-equivalence-mongers.

Much of the most recent bias is that of omission. The OMG Daily Mail featured a couple of tales about you-know-what and you-know-who which the BBC hasn’t covered. A story about foreign aid funding incitement against Jewish Israelis appeared in that newspaper two days running.
The readers’ comments were divided, perhaps between the anywheres and the somewheres, but one couldn’t be sure which was which.


The other Daily Mail story was more upbeat, and the same story was also featured in the Times. It was a ‘picture’ story about orthodox ‘Stamford Hill’ Jews celebrating Purim and was quite jolly. Ultra conservative parents were snapped with their children who were dressed up in elaborate fancy dress. Quite a sight. 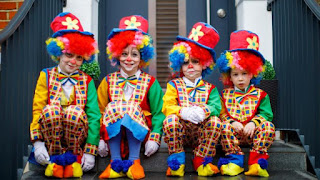 The BBC wasn’t interested. However, elsewhere it’s almost as if a lightbulb has suddenly been switched on. Oh look, here’s something we hadn’t noticed till now.

We await,  with anticipation, the media’s celebrations for the Balfour centenary. Hopefully not influenced by this. Warning; contains traces of Robert Fisk.

In fact there’s a rather embarrassing bandwagon emerging. The antisemitism bandwagon. People who were the most vocal “critics of what Israel is doing to the Palestinians” and the most ardent defenders of Islamic immigration and apologists for Hamas and so on, like, say Owen Jones, have started making statements about antisemitism, and how they’re against all forms of racism.

Jeremy Corbyn is on board, as are a sizeable portion of the Labour Party. It’s rife in the US too. Think Linda Sarsour whose recent concerns about antisemitism can only have been adopted to mask the antisemitism within her anti-Israel activism.
There has also been a mini explosion of genuinely non-political Israel-themed reporting. We’re talking foodie programmes and articles, although the Times piece featured a book based on Israeli research rather than the research itself.

Taking the ultra cynical view, as is my wont, it could be that a certain section of the media has belatedly woken up to the fact that the disproportionate focus on all things Islam (Eid, Ramalamadingdam, the Hajj, the hijab, etc) was beginning to look conspicuously propagandistic. They’ve realised that if they must equate antisemitism with Islamophobia and vice versa every time one or the other comes up, then they have no excuse for ignoring Purim or, for that matter failing to interest themselves in the wide ranging achievements of the Israelis.

This is pretty shocking by any scale of bias-by-omission. It’s yet another occasion when glorification of a murderer is played down.
Compare the (neutral) BBC’s report with (anti-Israel) Al Jazeera’s . The two reports appear to have got mixed up.

Recently I’ve been reading reports by Jonathan Hoffman on Harry’s Place and David Collier on his blog ‘Beyond The Great Divide’ about the appalling events in “Israel Apartheid week”  (I think it’s a fortnight now) an annual event hosted by various universities.

These talks take the form of one speaker or a panel and include a Q & A session. They do not appreciate criticism or any sort of critical questioning. If some of the speeches are fact-free and fanciful it doesn’t matter because we’re in a post-factual era. Only feelings count, and the sort of feelings at Israel Apartheid events should be evident from the title.

Talking of antisemitism, there were a couple of threads on Guido’s blog last week, one about Jenny Tonge and Jackie Walker having tea together. 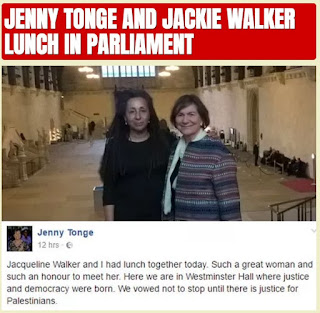 They say no-one reads the comments on Guido Fawkes’s blog. But surely that can’t be 100% true! Last week I read the comments on the thread entitled “Budget Bloodbath”. https://order-order.com/2017/03/08/budget-bloodbath/
For some reason this comment struck me:

“We have over 3 million muslims. 50% of the men and 75% of the women, are signed on at the Job Seekers Centres. Cost of their Benefits = £14 Billion a year.There are probably 600,000 Somalis living in the UK.80% live in Social Housing compared to 17% of the indigenous population. Over 21% of muslims have never worked.. These facts, and others, could drive one to drink. The future cost of this massive, uncontrolled immigration is virtually unimaginable.”

I don’t know if Mr. Collins’s figures are correct, but I did follow a link from Not a Sheep’s blog which appeared around the same time. It led to a covert video from 2009 filmed surreptitiously at the Darul Uloom school, which I hoped to paste into this blog for your edification. But it’s been taken down and I don’t really blame them. I wonder if the ofsted inspectors are mad or blind.

“A person who’s got less than a fistful of beard, then you should stay away from him”

said the teenage Imam, randomly kicking pupils as he wandered past the children sitting in rows on the floor
Thanks, I certainly will. And a person who’s got more than a fistful of beard and a dress, for sure.

Again, at the same time as the above - possibly on the same day - I came across a piece via a link on our sidebar to an item on the ITV website. 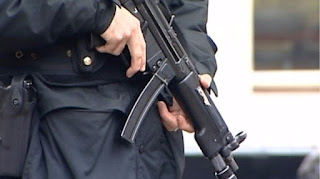 “A new report says measures to tackle terrorism and extremism are jeopardising efforts to promote integration in Britain.
Government initiatives such as Prevent and Channel risk "fomenting fear and resentment" among people from national and ethnic minorities, a European watchdog claims.”

I was going to paste the whole item into this, but you’ll get the drift from a few excerpts.


“The report highlights Prevent duty as a problem, the policy was brought in during 2015 and requires state bodies such as schools and councils to report people they suspect of being at risk of early radicalisation.
The Advisory Committee "observes that under these programmes liability has been shifted to local authorities and in particular to teachers, to detect early radicalisation," the paper says.


The report criticises the fact teachers and lecturers were not given the "necessary competence" and putting them at risk of "over-reacting for fear of breaking the law.
Prevent has repeatedly attracted controversy, with critics labelling it "toxic" and calling for it to be scrapped.”
[…]
The study said: "Overall, persons belonging to ethnic minorities are in a better place in reducing educational gaps, but challenges remain in relation to higher levels of unemployment, low wages, underemployment, worse health status and access to care, high levels of poverty, low levels of English language knowledge and inadequate political representation.”

(emphasis added.)
Tom Collin’s assertions look quite credible now. Surely it’s those European watchdogs that need watching.
A European watchdog that can’t even watch an ethnic minority that’s busily fomenting hate and resentment against ‘the unbelievers’ since well before the Prevent strategy was a gleam in the eye of its creator must be as useless as one of those chocolate teapots that people keep referring to.

If we’re afraid to provoke enclaves of hostile citizens by interfering with their hostility to us, we’re stymied. We’ll just have to stand back and wait till enough “fear and resentment” are fomented to ignite  civil war.
Meanwhile the BBC and much of the MSM are flooding the air waves with Good Muslim stuff while waiting for ‘integration’ to happen, which they hope to bring about by turning a blind eye to schools like Darul Uloom, ignoring the antisemitic teaching in aid-funded UNRWA and PA  schools and downplaying the glorification of Palestinian terrorists.
*********
Unlike my co-blogger I live in a self-employed micro bubble. Everyone round here is self-employed apart from, say, schoolteachers and the G.P. And I’m not too sure if he isn’t, come to think.
Meddling with NICs didn’t sound like good news but the devil’s in the detail and they say some will be better off. Maybe Phillip Hammond will be forced to make a u-turn when possible on the long and winding road towards our fiscal destination.

The other day I read an essay about how to construct essays. I thought it might help.
(The introduction should contain a clear indication of the proposed conclusion. The argument plus a counter-argument should be sandwiched between the introduction and the conclusion.)  Show your workings-out. Or make ‘em up and stick ‘em in afterwards.

What if you reach the end without a conclusion?  I’ll never be able to write properly constructed essays.