"Who asked you to defend the position?" 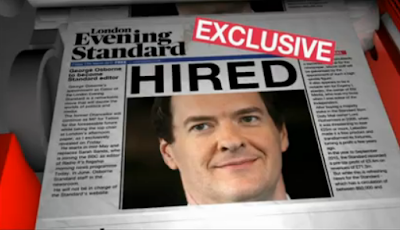 It was the BBC's new media editor Amol Rajan who got the scoop that George Osborne MP has become the new editor of the Lebedev-owned London Evening Standard.

Coincidentally, until December 2016, Amol was the editor of the Lebedev-owned Independent.

Amol announced his scoop in a long series of tweets:


1/ EXCLUSIVE: @George_Osborne APPOINTED EDITOR OF THE LONDON EVENING STANDARD (ES). Will continue as MP.
2/ Starts mid-May. Awaiting approval of civil service advisory c'ttee.. Succeeds Sarah Sands who's Editor of @BBCR4Today from early May...
3/ Many precedents for mixing politics + journalism, from Bill Deedes to Boris Johnson. GO will do ES in morning, then switch to being MP...
4/ Undoubtedly huge coup for ES, which gets v high profile + calibre leader - and also for ES owner (my former boss) @mrevgenylebedev...
5/ First task for GO: keep constituents happy (v tough). Also needs to pick right fights with government + address ES commercial challenges
6/ Don't see this as a problem for (still vast) political ambitions. His politics - liberal Tory, London roots, globalist - precisely ES...
7/ Key point is he has huge task both editorially AND commercially. Needs to find new revenue streams, possibly through events...
8/ He clearly has connections to do that, incl beyond London. ES still has unique reach and influence in capital. Staff will be galvanised..
9/ GO appointment sends a strong message to advertisers, rest of media industry - and his enemies and allies in the world of politics....
10/ I suspect the PM is about to find revenge is a dish best served in... a mischievous London newspaper with over a million readers...
11/ Osborne to address staff in Standard newsroom shortly after midday. More on my scoop @BBCNews + blog coming up: http://www.bbc.co.uk/news/correspondents/amolrajan …

This didn't go down too well with a couple of prominent Guardian writers - namely columnist (and Dateline London regular) Nesrine Malik and the paper's technology editor Jonathan Haynes.

They couldn't believe what they were reading and strongly criticised Amol Rajan for giving the appearance of acting like a Lebedev press spokesman rather than acting like the BBC's media editor (which he is): 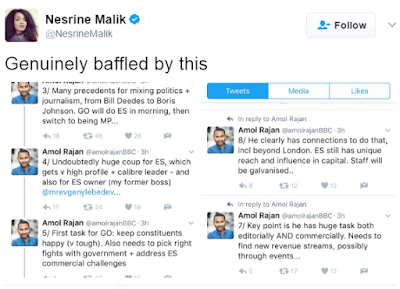 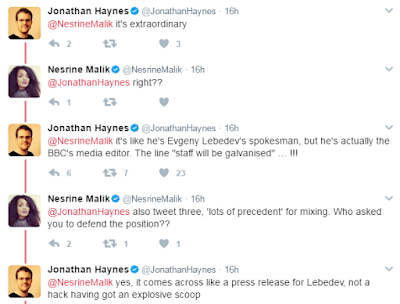 I think they had a point about some of those tweets.

Amol didn't directly respond to that on Twitter but did re-tweet various tweets praising his scroop and his impartiality. For example:

....though note (a) his description of Mr Osborne as the man who "took charge of rebuilding Britain following the financial crash and (b) the pro-Osborne balance of the featured vox pop voters from Tatton:


NEWSREADER: In a move that's astonished his fellow MPs and outraged some, the former Chancellor, George Osborne, has been appointed editor of the London Evening Standard daily newspaper. Mr Osborne says he'll combine the role with his job as MP for Tatton, as well as at least one other job working for an investment company. Here's our Media Editor, Amol Rajan, who broke the story.
AMOL RAJAN: George Osborne rose from young Tory advisor to Shadow Chancellor at the age of just 33, but six years after taking charge of rebuilding Britain's economy following the financial crash, he was sacked by Theresa May after the Brexit referendum. But stop press! Today he made a career change - or at least half of one. In a shock announcement, Osborne has been appointed editor of the London Evening Standard, a job he will do while continuing to be an MP.


GEORGE OSBORNE: I'm thrilled and excited to be the new editor of the Evening Standard. There are big issues in our world and what people want are authoritative facts, good analysis, great journalism. It's a really important time for good journalism and the Evening Standard is going to provide it.

AMOL RAJAN: In a few week's time George Osborne will take the editor's chair in this building. He'll arrive at 5am and leave around midday. But I spent years here too when I was editor of the Independent and I can tell you that there are managerial and commercial responsibilities too. Some editors have been known to work up to 100 hours per week. So the question that Standard staff are asking is how do you reconcile being a hard-working editor with being a hard-working MP? In his Tatton constituency in Cheshire today, this is how some voters reacted:


VOX POP 1: Obviously thrilled for George, remaining in the public spotlight. I guess one just hopes he will continue his constituency duties.
VOX POP 2: To me, he should either be that one or that one. Make one of them your job.
VOX POP 3: I don't have a problem with George Osborne doing that. I thought he was an amazing Chancellor.

AMOL RAJAN: Mr Osborne will be paid substantially less than his predecessor but then perhaps he doesn't need the money. The 45-year-old already earns nearly £75,000 as an MP. He took home over three quarters of a million in the past year for speeches. And he makes £650,000 a year for four days work a month at asset manager Black Rock.


ANDREW NEIL: I thought it was fake news when I heard it to begin with. Why is he doing it? Not for the money, because he's got plenty of money from elsewhere. I can only conclude that he wants to build the Standard into an alternative power base to Theresa May, and in the event of Brexit all going pear-shaped, he will use this power based to launch his attack.

AMOL RAJAN: Some have said there's a clear conflict of interest here. Others have questioned George Osborne's commitment to Parliament.


JEREMY CORBYN: He is very clever and he is very able but this is ridiculous. How can you edit a daily newspaper, the Evening Standard, which is for London, represent a Cheshire constituency, and be a director of a bank all at the same time?

AMOL RAJAN: He may be no stranger to the headlines, but George Osborne has limited journalistic experience and credentials. This surprise appointment will intrigue Westminster and readers of the Standard. The likelihood is that he will be a newspaper editor long after he's MP for Tatton.