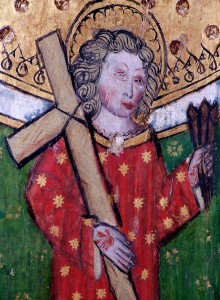 I listened with increasing incredulity to Jonathan Freedland's “The Long View of Targeted Fake News” Radio 4. He set out to compare the infamous blood-libel that stemmed from the murder of 8 year-old William of Norwich, with the “Fake News” of today.

I assume the general idea was to demonstrate the ease with which unfounded rumours can take hold, with ensuing dire and far-reaching consequences. Only - and this is as predictable as anything could possibly be - he chose not to make his comparison between the Jews of then and the Jews of today.  He chose instead  to make his comparison between the wholly unfounded libel against the Jews, which occurred in 1144 and the “New Jews” of the present day; namely the Muslims.
At one point he conceded that, while the rumours against the Jews were “bogus’ and “wholly invented”,  there “have been” some attacks involving Muslims, and “there’s a difference”.

“Yes” said Miqdaad Versi, the man from the MCB, deftly brushing terrorism to one side, “but there have been a number which are entirely fictitious,” and he cited a few inconsequential examples, such as the falsely reported Muslim ban on the new five-pound note. Good grief.
Jonathan Freedland's Long view isn’t long. In fact it’s pretty short. He failed to see that could have saved himself the trouble of contriving an unconvincing comparison for the very simple reason that the same old blood libel against Jews is still very much alive and kicking. It’s still the same old fake news, the same old antisemitic memes and themes; same as it ever was. He should have compared fake targeted news then with fake targeted news now.  But he didn’t. Instead he chose to make capital out of the flawed claim that ‘Muslims are the new Jews.
He should have taken a genuinely Long View, comparing the much maligned Jews of 1144 with the much maligned Jews of now.

Half the story about hatred of the Jews has been deliberately excised, quashed, suppressed, hidden away from “The News”.  What is “targeted and fake” about that? Just that the omission has crucially skewed the news to the point where it’s simply fake.

Trust Jonathan Freedland to invite someone from the Muslim Council of Britain to cement his false comparison.
Still with Jonathan Freedland,  I had intended to say something more about David Goodhart, whose new book “The Road to Somewhere" I wrote about the other day.
Goodhart seemed to me to be a person from the left who is now perceived by persons from the further left as a bit of a traitor. They accuse him of turning right, evidencing his populist views on immigration, or rather his understanding, nay, sympathetic portrayal of ‘the right’s’ views on immigration. He’s a veritable Gillian Duffy, they assert.

I happened to see Mr. Goodhart on Sunday’s The Big Questions and I still had the feeling, that for all his rationalisations of the poor misunderstood ‘Leave’ voters for whom he’s created the benign-sounding term “Somewheres’,  he is at heart a true lefty trying his best to appear even-handed.

However, I did wonder, yet again, if I’d got him wrong. Now that Jonathan Freedland has reviewed his book for the Guardian, I’m beginning to think I just might have been right all along.

The first part of the review consists of a straightforward description of the book’s contents.
(Here am I opining on a book I haven’t even read, the irony of which hasn’t escaped me.)
However, it’s not so much the book itself that concerns me here, but Freedland’s tiresome conflation of Jewish and Muslim communities.
Here’s the bit that interested me, which I’ll quote in full:

“Where Goodhart goes wrong above all is on Britain’s ethnic and religious minorities. Even though he concedes that these groups can exhibit Somewhere-ish attitudes – prioritising stable families, for example – he frames them throughout as the cloud on the Somewheres’ horizon, the blot that has darkened the Somewheres’ previously sunny landscape. It is their arrival that has changed Britain beyond recognition, their presence that has to be dealt with.

I’d contend that this ‘blot’ applies exclusively to large Muslim communities where whole ‘landscapes’ have changed beyond recognition and the hapless outsider is subjected to a palpable atmosphere of hostility. This doesn’t apply, on the whole, to Jewish communities, apart from, say, the odd rudeness or brusqueness emanating from some of the ultra orthodox. But Freedland insists on conflating them. He continues:

“Perhaps my own experience as a member of Britain’s Jewish community has skewed my perspective, but I’d suggest that the very qualities Goodhart most admires among the Somewheres – including neighbourliness, trust and a sense of shared destiny – are to be found in Britain’s minorities. They have not caused the social fragmentation he laments: globalisation, automation and a thousand other shifts bear more blame than they do. If anything, and especially in the cities, they point to a remedy for those Anywheres Goodhart believes have become unmoored. Minorities might be more of a model than a threat, more to be emulated than to be feared.”

Where does Jonathan Freedland live? Luton, perhaps? High Wycombe?  Rotherham? I doubt it.