Having just seen Joanna Gosling introduce witnesses of similar terrorist attacks in various European countries, I couldn’t help but notice that similar testimonies from one particular country were conspicuously absent.

I do realise that the BBC could easily excuse this editorial decision by saying that they were confining this item to “Europe” (for some reason) but since the particular style of attack, i.e., car-ramming and stabbing was the specific M.O. employed and encouraged by Mahmoud Abbas’s  PA, it ought to have been of some interest to the UK audience. 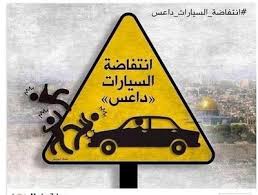 Of course, the BBC is aware that exposing such a thing wouldn’t go down well with the Muslim community. But as the London attack had nothing to do with British Muslims, as several previous speakers, have been keen to explain, a quick mention of the terrorism that goes on in Israel shouldn’t be that much of a problem.

Unless the BBC feels that it would be a little awkward to highlight the discrepancy between their habitual justification of the Palestinians’ case (frustration at not having a state) and the lack of similarly ‘balanced’ treatment presently afforded to the London attack (eg., putting the case for ISIS) in the name of balance and impartiality.
Posted by sue at 13:06