Impressionistic view of The Day After

These are just personal impressions.They’re offered in the true spirit of ‘views my own’ .

When all you hear from our MPs is: “we won’t let the terrorists win. We’ll carry on our daily business as usual” you might not expect torrents of cliches belched out in churchy, reverential tones by MPs of all shapes and sizes to totally occupy parliamentary business for a whole morning. Get on with parliamentary business then, why don’t you?

Theresa May set an (almost) appropriate tone, which was quite enough. Hearing MP after MP reciting a speech that is virtually identical to the previous speeches of right honourable friend after right honourable friend, one loses hope. Even those that desperately tried (and failed) to add an original thought to the recipe managed to trip themselves up.

When Jeremy Corbyn tried to commiserate with the injured French schoolchildren he couldn’t pronounce Concarneau. Then he announced that we wouldn’t be ‘cowered’, as if he was studiously avoiding the word ‘cowed’ with its unfortunate cattle resonances. (Not that he actually was doing anything quite so clever. He just thought ‘cowered’ was the right word.)

Everyone insisted they wouldn’t be divided and that terrorists wouldn’t make us change our ways of life. Keep calm and carry on and don’t mention the war.

Theresa May spoke about the shared values of free people, but she made it sound like ‘three people”, which made me wonder whether I was dreaming or whether it had actually turned into a full-blown farce.

Michael Fallon said something about the pointlessness or fruitlessness  of murdering “completely innocent people”, apparently forgetting that one of ISIS’s pet objectives is putting the kibosh on tourism. Remember Tunisia?

I wondered if Andrew Mitchell felt any pangs. Surely he might think it puts the whole policemen-gates-bike pantomime into perspective.

Laura K was reprimanded by a former security services expert on the Daily Politics for making prematurely disparaging remarks about the police. Her scoop about NICs must have gone to her head.

The last thing I want to hear is Harriet Harman yakking on about Islamophobia. 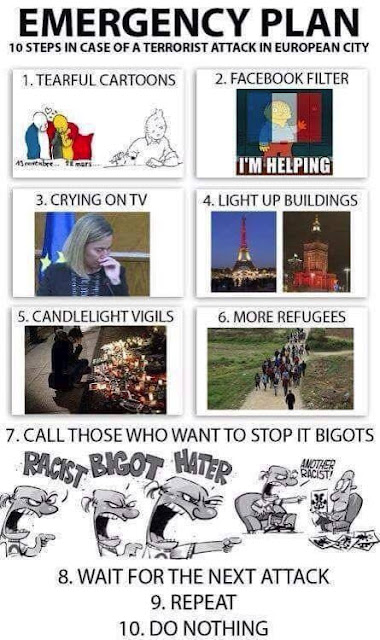 There’s a virtue-signal graphic doing the rounds, which I wholeheartedly approve of - but with reservations about  No 4. where the image from Tel Aviv ‘lit up in solidarity’ is concerned. 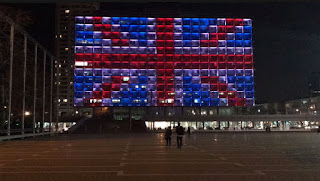 I found it quite moving. Particularly because here in the UK we obviously aren’t ready to reciprocate that sentiment.
Posted by sue at 14:53