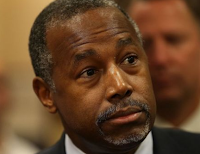 Alan at Biased BBC has already covered this, and DB has also covered it (for Twitter), but I still think it's worth gathering together and adding to...

Here are a pair of statements from two leading U.S. politicians:

It wasn't always easy for new immigrants. Certainly, it wasn't easy for those of African heritage who had not come here voluntarily and yet in their own way were immigrants themselves. There was discrimination and hardship and poverty. But, like you, they no doubt found inspiration in all those who had come before them. And they were able to muster faith that, here in America, they might build a better life and give their children something more.

Both describes African slaves forcibly taken to America as "immigrants" and both talk of the "inspiration", the "dream", that they had that their children would do better.

Only one, however, provoked righteous fury - and critical media reporting from the BBC. (If you're new to this story, please try and guess which one got panned).

Well, here's the answer from one of the BBC's US correspondents, getting hot under the collar about just one of those statements on Twitter: 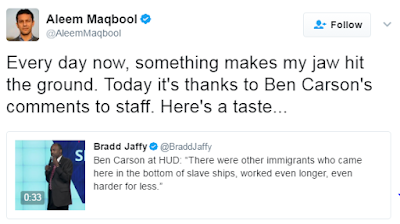 Yes, the second quote comes from Republican Ben Carson. The first quote came from Barack Obama. The fact that the second got a free pass while the former causes Aleem Maqbool's jaw to hit the ground says something about media bias, doesn't it?

And that's even before you read this:

And, frankly, it's all downhill for Mr Carson thereafter,

It's a spiteful little piece of BBC reporting, as far from BBC impartiality as it's possible to be.

The fact than Ben Carson appears to hold a lot of utterly ridiculous views (in my opinion), doesn't get away from the fact that this astonishing BBC article is clearly not an unbiased piece of reporting. It's a gleeful take-down, making its target appear as ridiculous as possible.

Wonder which BBC reporter wrote it? Were they afraid to put their name to it?
Posted by Craig at 19:54