"This is madness. Just to keep the people out" 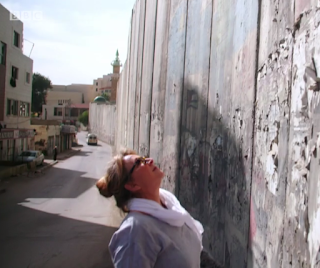 Israel's security barrier, which opponents call 'a wall', has drastically reduced the number of victims of suicide bombings in Israel since its construction began. The figures are dramatic:

That didn't stop BBC One from broadcasting the following during its main Good Friday special, Fern Britton's Holy Land Journey:

Fern Britton: This is a nice little town. People going about their daily business on a Monday morning. But life here isn't as simple as it first looks because, running through the town, is a wall built by Israel for what it says are security reasons. Oh, my goodness! Now you've heard about the wall. Look at this! This is the wall. And that is NOT a thing of beauty, is it? Oh, my goodness, look! You hear about humans erecting big walls like this in the middle of cities. Obviously Berlin, here, possibly between Mexico and America. This is madness. Just to keep the people out. You won't be able to climb up that, would you, that's for sure?