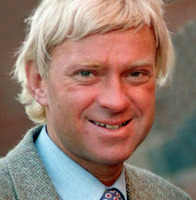 If you still wishfully think that Twitter doesn't matter, here's a recent exchange on that benighted social medium between a 19 year old female tweeter and a Tory MP:

The famously blond Mr Fabricant has landed himself in a whole lot of (Twitter) trouble for using the t-word there and young Darcy has demanded satisfaction, as duellers say, waving her Twitter glove in Mr Fabricant's face.

And guess what? Yes, the BBC is right on Mr F's case. 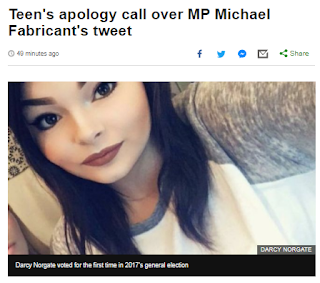 And (another yes), believe it or not, this 'scandal' really is on the BBC News website Home page and among its headlines.

Mr. F says he thought she might be a troll for all he knew...

...[and looking at her Twitter image and the fact that she's been silent on Twitter for four years before this - from 2014 to 2018 - I can well imagine why he thought she might not be a real constituent]...

...and added that he used the t-word in the way he says he thought it was meant: 'twit' (which, I have to say, sounds plausible as far as Michael Fabricant is concerned! - even before we come to the actual context of the exchange, quoted above).

The BBC report is going big with Darcy's anger. It's her outrage that is leading the story. Mr Fabricant's defence only arrives in the fourth paragraph:

A teenager has demanded an apology from her MP after he called her an offensive name on Twitter.

Darcy Norgate, 19, said she was shocked when Michael Fabricant replied to her with a slang word for female genitalia.

She said he launched a "personal attack" after she questioned his commitment to Burntwood, Staffordshire.

The Lichfield MP tweeted that Ms Darcy (sic) had not said she was his constituent and he thought of the word as a synonym for "twit".

And Miss Norgate's complaints continue to dominate the article.

And to make things look worse, according to this BBC report, Mr F has declined an interview with the BBC about it.

Quite why the BBC keeps referring to Darcy Norgate as "Ms Darcy" throughout their report is anyone's guess. (Very Confederate-gentlemanly of them!) .

The row began when Ms Darcy (sic) responded to his comment that Labour's performance in the local elections had been disappointing".

Intriguingly for us who follow the snaky, Satanic medium of Twitter we can read the whole exchange (quoted above) and see that the dashing Mr Fabricant's main point - that the young lady was talking male genitalia (so to speak) about Burntwood, a part of his constituency - completely failed to make this sic-filled BBC report. (Mr Fabricant was correct and Miss Norgate was incorrect).

In the interests of disinterested blogging, I read this and thought "Good grief!". And, thus, I share it with you here.

I'll be watching Newssniffer to see if this hapless article is edited.
Posted by Craig at 23:41