Another one bites the dust

There are certain things that no sensible person can deny, don't you think?

(As ever, please feel free to deny them if you want.)

(a) that 'Islamophobia' is a term originally foisted upon us by Islamic supremacists intent on rendering Islam beyond criticism, subsequently taken up by (their) useful idiots,

(c) that the authoritarian Chinese communist regime has reverted to trying to turn out an obedient population in the usual Orwellian manner of such regimes.

And yet saying those reasonable things has resulted in our finest philosopher Sir Roger Scruton being sacked by the hapless, gutless weather vanes in  our present Government.

Why? Because they caved in to yet another hue-and-cry from the usual fools, frauds and firebrands, this time following a New Statesman interview.

I really would like to see the full interview too, rather than just read the NS edited quotes in a heavily-authored NS article. Forgive me if I don't trust them. I specifically want to see the full context of Sir Roger's remarks about the Chinese tyranny and its effects on the Chinese people. I'm particularly suspicious of the dots in the quote cited in the NS. (“They’re creating robots out of their own people… each Chinese person is a kind of replica of the next one and that is a very frightening thing.”)

Back to the BBC.

This is how the BBC News website presented the story.

(Note how the even-more-edited-than-in-the-New-Statesman quote in the third paragraph makes Sir Roger sound like he's being racist):

Conservative academic Sir Roger Scruton has been sacked as head of a government housing body following critical comments about Islam and China.

The philosopher's appointment to head the Building Beautiful Commission in November was criticised at the time.

He has now been dismissed after claiming Islamophobia was "a propaganda word" and "each Chinese person is a kind of replica of the next one".

The Ministry of Housing said the remarks were "unacceptable".

Sir Roger left his position "with immediate effect" after an interview with the New Statesman in which he restated past comments about Islamophobia, and Jewish financier and philanthropist George Soros.

He said that "anybody who doesn't think that there's a Soros empire in Hungary has not observed the facts" while he said China was "creating robots out of their own people" which he said was a "frightening thing".

He said he stood by comments he has made in the past that Islamophobia was a "propaganda word invented by the Muslim Brotherhood in order to stop discussion of a major issue".

The Conservatives have been accused of failing to act over Islamophobia in the party.

Communities Secretary James Brokenshire defended Sir Roger at the time of his appointment amid claims his views made him unsuitable for the job, saying many of the attacks on him were "misinformed and ill-judged".

A government spokesman said on Wednesday: "Sir Roger Scruton has been dismissed as Chairman of the Building Better Building Beautiful Commission with immediate effect, following his unacceptable comments."

And Radio 4's Six O'Clock News gave us this take on the story:


A government adviser has been sacked for making comments about Islamophobia which Labour said invoked the language of white supremacists. A government spokeswoman said Sir Roger Scruton, who had an unpaid role as a housing adviser, had made unacceptable remarks to a political magazine. The New Statesman says the philosopher repeated comments he first made last year in which he described Islamophobia as a propaganda word invented by the Muslim Brotherhood.

The Labour person who used the 'white supremacist' charge against Professor Scruton, if you were wondering, was Dawn Butler.

You may remember her as being the one who accused Jamie Oliver of "cultural appropriation" over a jerk rice product, and who called Theresa May "racist" over the Windrush affair, and who's called Donald Trump "racist" and Sir Alan Sugar "racist" and yet who appointed an advisor who said that "all whites" are racist.

I think I'll stick with Sir Roger rather than Dawn. I suspect he's vastly less racist at heart than she is.


Update: Aha, the New Statesman journalist responsible was challenged over those dots in the quote “They’re creating robots out of their own people… each Chinese person is a kind of replica of the next one and that is a very frightening thing”.

The ellipses stood for "by constraining what can be done".

Apparently there wasn't "space" for those six words in the New Statesman!: 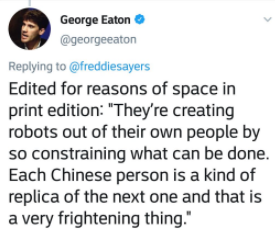 Lots of people weren't happy with George Eaton's behaviour (even more after he then deleted the above tweet):


Freddie Sayers: So the full Scruton quote is about tyrannical Chinese government overreach - that is the sense in which Chinese people are being made into replicas of one another. The only thing "outrageous" about this quote is the way it was edited.
Kristian Niemietz: The edit totally changes the meaning. In the edited version, it sounds as if Scruton were using racial stereotypes. In the full version, it's clear that he does nothing of the sort. He's critiquing conformity-enforcing government policies.
Claire Fox: Regardless of what one thinks of Scruton, twisting of his quote that attacks Chinese authoritarianism (& how it treats its citizens) presented as attack on Chinese people, is a worrying sign of 'hit' journalism.  Who'll ever give an interview if their words edited this way?
Adrian Hilton:  This is unethical journalism. You can't interview someone and then edit their comments so that readers will infer racism, when clearly Roger Scruton was referring to the generational replication of communist ideology. Has George Eaton deleted his tweet because of disk space?
Maajid Nawaz: Hi, George Eaton, agree or not with Scruton, it is simply *dishonest* to edit his quote. What’s happening here is not a neat picture of “my side good, your side bad”, but rather bad actors deliberately misrepresenting people who have said some (other) bad things. This, just to achieve a “gotcha” moment for selfish reasons, which ultimately undermines honest debate. You’re a left-wing anti-racist journalist. I’m a survivor of a recent violent racist attack, leaving me scarred for life. Can you justify to me why you lied about Roger Scruton’s quote about the Chinese, making it harder for racism victims like me to be believed?
Michael Brendan Dougherty: For reasons of space, George Eaton had to excise the precise five words that entirely change the meaning of his subject's quote. Imagine forfeiting your self-respect as a journalist and the respect of every half-literate reader for the backslapping of Owen Jones.
Ryan Bourne: Leaving aside other quotes, libertarians and conservatives should refuse to give comment to George Eaton after seeing the way he disgracefully partially quoted Scruton to change the meaning of China remark. Eaton has proved himself a partisan hit man.
Simon Evans: I've just looked up his comments on Chinese people. They are actually an attack on the Chinese regime and in fact supportive of Chinese people. Completely the opposite of what George Eaton is dishonestly reporting. How is he allowed to get away with this?