Dame Emma jets in to save the planet 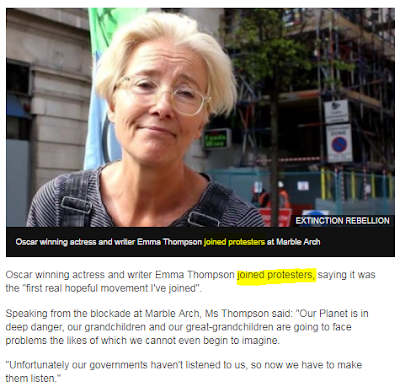 You'll notice that it misses out a part of the story that most other news outlets have not only included but actually turned into headline news, such as:

Both of Sky's paper reviews last night discussed the 'hypocrisy' charge against Dame Emma, with the Sky presenter last night both times noting that her 5,400 mile flight does appear to "belie" the the protestors' focus on aviation, and Sky's paper review this morning moved back to it with the presenter noting that her flight must have "burned a little bit of fuel". Contrast that with the BBC News Channel where much less has been said - none of it critical of Dame Emma. One one paper review last night a guest alluded to the story only to sneer at the Daily Mail's "slant" on, and on this morning's BBC Breakfast Naga Munchetty said, in an upbeat tone:

Now, she could have been being deadpan there, if you just see that in writing. But it didn't sound deadpan. It sounded as if Naga hadn't even recognised the issue arising from the dame flying over from LA to London.

The 'hypocrisy' angle just doesn't seem to be gripping the BBC.

Wonder if Have I Got News For You will mock her about it next week?
Posted by Craig at 10:29