I don't think Adel Darwish enjoyed it very much:

Time to tune away from the BBC News Channel. Useless, Americanised waste of time show Dateline London. The entire panel are lefties, europhile, anti-Trump... in short reflects BBC groupthink. Instead of depriving elderly people from free BBC Licence it is time to abolish it altogether.

Thomas Keilinger of Die Welt doesn't really count as a lefty, but otherwise that sums up the 'range' of opinions on offer today.

That said, how could anyone not really enjoy it when it had everyone's favourite Dateline regular on? My heart leaped and I emitted a joyous 'Yabba dabba doo!' as Yasmin Alibhai Brown's ever-cheerful face and wildly gesticulating hands returned to brighten up our screens. Seriously, who doesn't enjoy listening to her unpleasant and unreasonable rants? (Now, where are my happy pills again?) 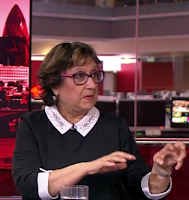