I read a tweet earlier today from the estimable Stephen Pollard, editor of the Jewish Chronicle, which said in response to another tweet: 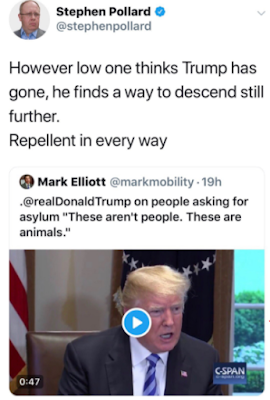 Stephen has subsequently deleted this tweet, whilst retaining the link to show his own error - which is an admirable way to behave. Own up, don't hide what you got wrong, and take action:

Having seen this, I suspected that some of our BBC favourites would have leaped on that Mark Elliott tweet with all the relish of half-starved lions (especially post-Mueller). And, yes, one of my first ports of call, our old friend Hugh Sykes, was indeed on it like a lion up a massive lion-sized drainpipe that includes branches so the lion can climb up it and that already has a tasty deer carcass at the top of it to make all the effort worthwhile (#extendedmetaphorsaregreat):

I hope I'm wrong, but I'm guessing Hugh won't be owning up and deleting his tweet.
Posted by Craig at 16:49