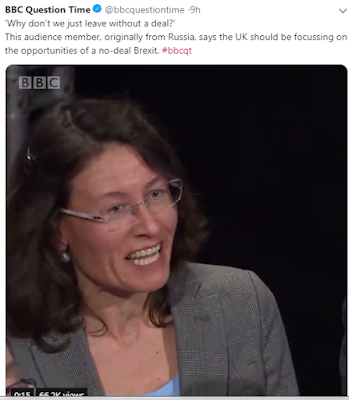 This got a reaction, quite a few along the lines suggested by this popular internet meme of an approving Putin: 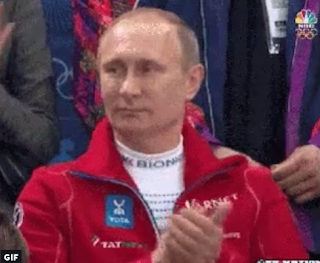 Was that the intended reaction? Some think it was:

Thomas Evans: Why is it relevant to BBC Question Time which country she came from? I have never seen @BBCPolitics (#BBCQT) single out the country of origin of speakers in the audience of the program before. I think we all know why the BBC have highlighted that she originally came from Russia.
Kenneth Michie: Fiona did the same when another Soviet lady spoke up for Brexit in BBCQT broadcast from Bath recently. When asked where she came from lady replied 'I escaped from another union of Soviets'. Almost as if BBC are trying to say Putin has infiltrated Brexit.
Suzanne Evans: That’s exactly what they’re trying to say. No comprehension at all that this woman, having escaped one oppressive statist block, might not want to live in another.
G: I have seen people on BBCQT who can hardly speak a word of English & obviously not from here but never ever get asked where they are from! Its strange but there are a lot of odd things with Fiona & the BBC.