The sun will rise in the morning and set in the evening as Planet Earth turns on its axis and orbits our local star.

Such things are predictable.

But surely even more predictable is the likelihood that in the run-up to May's local elections - or May's increasingly likely European elections - the left-illiberal journalists at Newsnight would try wielding their hatchets against parties they dislike.

As so often in the past, this time it looks as if they've got UKIP in their cross hairs. UKIP leader Gerard Batten tweeted this earlier today: 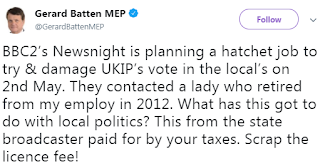 Gerard also attached a couple of emails from a Newsnight producer, Jake Morris, to the lady in question: 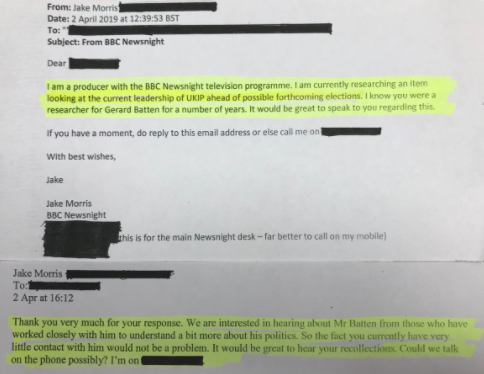 Wonder who'll get this 'gig' for Newsnight? It would be nice if it was John Sweeney, so that people could use that meme from The Shining of Jack Nicklaus, the golf-playing actor, smashing his way though UKIP's door and - with madness in his eyes - crying 'Here's Sweeney!'.
Posted by Craig at 20:15