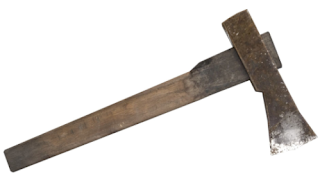 Hatchet-face in reference to one with sharp and prominent features is from 1650s. In Middle English, hatch itself was used in a sense "battle-axe." In 14c., hang up (one's) hatchet meant "stop what one is doing."

Phrase bury the hatchet "lay aside instruments of war, forget injuries and make peace" (1754) is from a Native American peacemaking custom described from 1680.

Hatchet-man was originally California slang for "hired Chinese assassin" (1880), later extended figuratively to journalists who attacked the reputation of a public figure (1944).

Who knows if BBC hatchet-woman Kate Whannel is hatchet-faced but UKIP are unlikely to want to bury the hatchet with the BBC after her hatchet-job on the party for the BBC News website.

Now, UKIP have certainly inflicted many, many wounds on themselves over the years because of their interminable infighting, and this piece chronicles pretty much every last example of that since the 2014 European elections.

But is this BBC piece just a blood-soaked chronicle of true events?

Or is it more like BBC campaigning against Gerard Batten's present-day UKIP in the lead-up to those increasingly likely new European elections and trying to crush it once and for all?

Of the article's 42 paragraphs, 5 bullet points, 6 sub-headlines (Post-referendum infighting: Expulsion, defections and a retirement; The Bolton era: 'Countless leaks, briefings and character assassinations'; Batten takes over: 'Increasingly out of kilter'; Tommy Robinson hired: 'A catastrophic error'; Where have they gone?; Who is left?) and 9 images with captions (including Gerard Batten's controversial reign has seen a drove of resignations), pretty much every single one of which is used to pile on the agony for UKIP.

In fairness though, BBC hatchet-woman Kate does grant three paragraphs to the defence right at the very end - which was jolly nice of her.