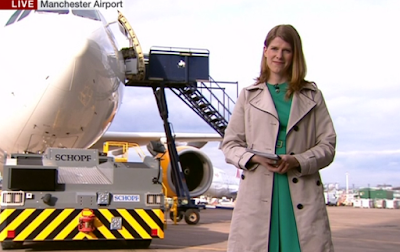 At just after 6 O'Clock this evening I had another of those 'Did the BBC really just say that?' moments.

One of the headlines on tonight's BBC One News at Six began:

A rise in the number of Brits going on holiday outside the EU.

I'd barely had time to think 'Oh, that's interesting. That'll be good news for non-EU countries' when Sophie continued:

Why did they say Brexit's "to blame", as if it's 'a bad thing', for causing "a rise in the number of Brits going on holiday outside the EU"?

Why wasn't their headline, say, "A rise in the number of Brits going on holiday outside the EU. Travel companies say it's thanks to Brexit"?

After all, it very well might actually be a 'good news story' for plenty of non-EU countries (like Turkey and Tunisia) and for British holiday makers (who could be getting more value for money).

The BBC could even have gone straight down the middle here and said, "A rise in the number of Brits going on holiday outside the EU. Travel companies say Brexit's the cause".

But they didn't. They instead said that Brexit's "to blame".

I'm not getting any sense from Reuters that UK travel companies are 'blaming Brexit' for causing 'a bad thing' to happen in respect of the shift towards non-EU countries (from 38% to 48% over the past year).

Now, obviously travel companies will be worrying about that famous 'Brexit uncertainty' and have apparently experienced a fall in the number of bookings for their usual destinations, but, as Reuters continues...


...a majority of the 3,422 UK holidaymakers surveyed by the company nevertheless said they were more likely to holiday abroad than last year, with a quarter saying that a foreign holiday was higher in their spending priorities than in 2018, compared to just 8 percent who said it was lower.

Am I missing something, or is this just seriously biased BBC anti-Brexit spinning again?
Posted by Craig at 22:59