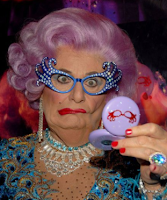 "I was born in Melbourne with a precious gift. Dame Nature stooped over my cot and gave me this gift. It was the ability to laugh at the misfortunes of others."

"There is no more terrible fate for a comedian than to be taken seriously," Barry Humphries once said.

Whether that fate has now befallen him or his 'woke' comedic critics, I'll let Dame Nature decide.

Anyhow, the BBC's online report about how an Australian comedy festival is no longing use his name for its chief prize after he was accused of 'transphobia' is typically 'woke' (or, if you prefer, 'biased') in quoting only critics of the mighty 85 year old.

Turn to the Times, however, and you find a report which features supporters of Barry as well as critics.

The latter is surely the better journalistic way to do it.

Someone, somewhere (here?) could perhaps adapt the Barry Humphries joke “New Zealand is a country of thirty thousand million sheep, three million of whom think they are human” and apply it to the journalists of the BBC News website instead.
Posted by Craig at 22:30