Who to believe, the BBC or Agence France-Presse (AFP)?

According to the BBC: 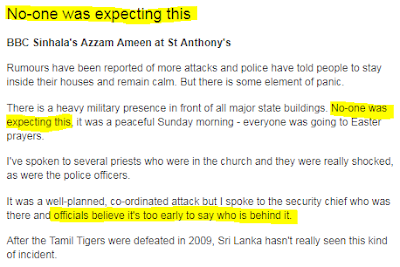 The nature of the blasts was not immediately clear and there were no immediate claims of responsibility.

"A foreign intelligence agency has reported that the NTJ (National Thowheeth Jama'ath) is planning to carry out suicide attacks targeting prominent churches as well as the Indian high commission in Colombo," the alert said.

The NTJ is a radical Muslim group in Sri Lanka that was linked last year to the vandalisation of Buddhist statues.