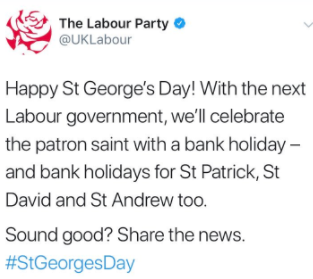 Unfortunately, today isn't St George's Day, so - after lots of people pointed that out to them - they deleted the tweet.

That's becoming something of a habit. The other day, the Labour Party sent out a tweet to mark Passover: 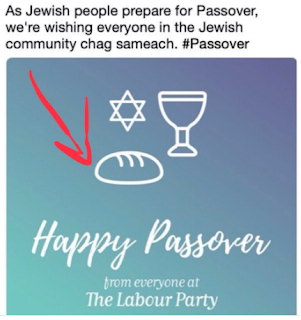 Unfortunately, loaves of bread (as shown on their tweet) are not eaten by Jews during Passover, as lots of people pointed out to them. Labour deleted that tweet too.

Oh the fun Ian Hislop and Paul Merton and Frankie Boyle and Miles Jupp and Mark Steel are going to have with this on the BBC this week!...

And BBC Trending is surely going to make hay with this.