This is fascinating Charles 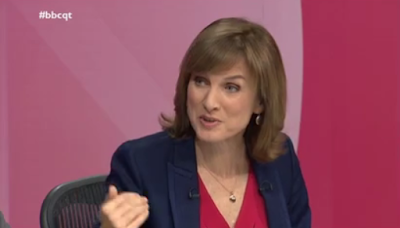 It was good to see that Fiona Bruce is keeping up the fine David Dimbleby tradition of trying to close down anyone who dares criticise the BBC for bias on Question Time. Charles Moore was a tougher nut to crack, but she got there in the end. David would have been so proud of her...


Charles Moore: Thank you, Fiona. Just before I answer that question, can I say...can I ask you a question, Fiona, because here I am and I'm delighted and honoured to be here, but it's a panel of five and I'm the only Leave supporter. And if you look at the..
Fiona Bruce: (interrupting) You're the only person who voted Leave. The Government is supporting Leave.
Charles Moore: I think I'm the only Leave supporter as well as a matter of fact. We can argue about that. But I'm certainly the only person who voted Leave. And again and again on this programme, the balance totally fails to reflect the wider country...
Fiona Bruce: (interrupting) Can I just make the point Charles. This is a question to me, so let me answer.
Charles Moore: Yes, but I...
Fiona Bruce: Obviously the Government supports the Leave position and last week we had three people who take the Leave position and two people who took the Remain position.
Ash Sarkar: And I did not vote.
Fiona Bruce (to Charles Moore): I can't agree with you, but feel free to answer Philo's question.
Charles Moore: The Institute of Economic Affairs did a survey of what happened in the balance on this just recently and they showed that Leave appearances have only been 36% whereas Remain has been 60% on this programme, and
Fiona Bruce: (interrupting) I think this is...We're talking about different definitions of leaving. This is fascinating Charles.
Charles Moore: Can you explain what's happened Fiona? I would be very interested to know why the BBC can't reflect the wider country. Why is it that the political class constantly dominates this programme when we know that more than half the people who voted voted Leave. Why? What is the answer?
Fiona Bruce: Well, I told you about the programme last week.  We have here a government minister and the Government's position is Leave.
Charles Moore: Well, ha ha! You know (laughing).
Fiona Bruce: Well, it may not be your version, Charles, but that is the Government's position and fascinating though this is, this is a moment for the audience to ask question of you and I'm sure you wouldn't want to deny them that opportunity.
Charles Moore: I would be delighted to answer the gentleman's question, which is that I think Theresa May is doing a better job of dividing her own party than dividing the Labour Party and I think that her move is extremely unwise, and it's one of a series of moves that she's made that has been mistimed and which have gone against what she's said before.
Posted by Craig at 07:27