An opinion poll the BBC wants you to believe (update)

Here's a curious postscript to a post from earlier today....

The BBC Press Office sent this tweet out a couple of days ago about a BBC-commissioned IPSOS Mori showing the BBC to be trusted much more than any of its competitors (well, on this particular take anyhow) : 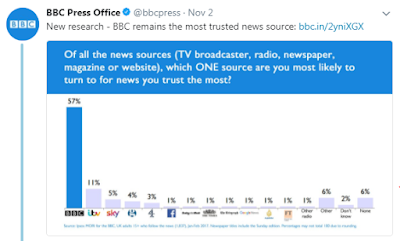 But it turns out that this IPSOS Mori poll isn't quite the 'new research' the BBC Press Office claims it is.

A commenter on that earlier thread noted that the 57% figure also appeared in that new (and flawed) Cardiff University which 'found' the BBC to be right-wing biased.

The presumption would naturally be that the BBC shared it with their academic impartiality-checking chums at Cardiff University. But when?

You pass through that very wormhole and land back in March 2017 at a BBC Trust transcript of a speech by the Trust's last head Rona Fairhead where she does precisely what the BBC Press Office was doing a couple of days ago - quotes from, and gloats over, that very polling data:

So what's going on? Well, if you look at the small print of this 'new' IPSOS Mori poll you'll see that all the polling for it was done in January and February of this year.

In other words, this 'new' poll is some nine months out of date.

And as for it being 'new research', well if 'new' means getting on for a year old then 'new' it is. Unfortunately, 'new' usually means 'new'. (And I've re-checked my dictionary to make sure).

I don't know about you but I feel misled by the BBC Press Office here...

...ironically over a poll about BBC trustworthiness.

As Abraham Lincoln once said, you couldn't make it up!
Posted by Craig at 21:09