Has this ever happened to you? You're enjoying a nice nap at work when someone in your office suddenly shouts 'Boom!' and wakes you from your happy slumbers?

Well, it must be like that many a night at the BBC - at least according to The Sun who splashed today with the 'TV scandal' that BBC News Channel staff are snoozing the night away at BBC licence fee payers' expense.

A BBC snitch told The Sun that "during a 12-hour night shift some staff do around an hour of work" and sent them a dozen or so photos of BBC staff 'sending exclusive reports from the Land of Nod', so to speak.

Sir Peter Bone MP (and, one presumes, Mrs Bone too) is aghast.

The BBC hasn't taken this lying down - or slumped over their desks fast asleep either. BBC staff have taken to Twitter en masse to mock The Sun and the BBC Press Office has re-tweeted that poll graphic about trust again, with a Sun-baiting tweak: 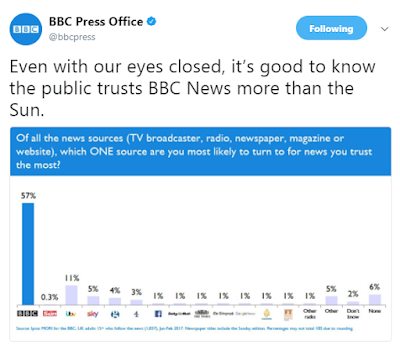 Alas, not one person (not even a BBC editor) ever bothered to shout 'Boom!' when I wrote a truly sleep-shattering piece recently about this very poll, but the fact remains that this BBC-commissioned IPSOS Mori poll is old - and some might say [see what I did there?] ' fake' - news.

It's a reheated poll from January/February this year, which ex-BBC Trust head Rona Fairhead was already using to defend the BBC back in March.

We've had an election in between then and now. Peoples views of the BBC might have changed over the last nine or more months. The BBC's stock could have plummeted. Who knows?

Yet the BBC Press Office tried to pass the results off as a new poll with new findings earlier this month - like some dodgy restaurateur passing off last week's leftovers as 'a Chef's special'.