Sticking up for Hillary 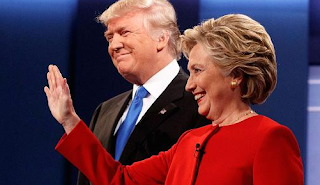 A failure to follow up on stories after the facts change is an abiding sin of journalism and, as we know, the BBC is far from being innocent of it.

Here's a small-scale but interesting example of that from the US online music and entertainment magazine Paste concerning a BBC Trending article from 2016.

The BBC article aired complaints from Hillary supporters about Bernie supporters ('Bernie Bros') during the US primaries.

Here's the bit from Paste:

The failure to update the piece to reflect a change of fact and the intrusion of an angle from the BBC reporter (see that telltale word "even") is rather too typical of BBC reporting, especially of US matters, these days.

Incidentally, that same BBC reporter - Jessica Lussenhop, a senior staff writer for BBC North America - was responsible for such US election BBC pieces as the heartwarming article headlined The girl who 'dared' Hillary Clinton to compete. She also wrote feminist-inspired reports about how the media were guilty of sexism over their coverage of Mrs Clinton and one on the Clinton-Trump debates. All appear to come from one particular 'angle'.
Posted by Craig at 12:26